M’CHIGEENG – The past couple of years have seen many milestones passed at Kenjgewin Teg, the educational institute based in M’Chigeeng First Nation. Last month students at Kenj’s trades centre were able to tackle one of their key Canadian Welding Bureau (CWB) certifications, as the school has been officially recognized as a testing site.

The certification is a very big deal, as possession of a CWB certificate tells employers that a potential worker meets a very exacting level of welding skill.

Five current and former students of the school’s welding course were busy burning, grinding and (MIG) welding on steel test plates under the watchful eye of instructor Dave Barnes and J“The students are doing their all-position, shielded metal arc welding certificate,” explained Mr. Barnes. “They start flat, then horizontal, vertical up and then overhead.”

But good looks only get you so far. “They start with taking the backing off the plate, then cut the plate into three,” explained Mr. Fournier. “The plate is then bent 180° to make sure they hold together. If a crack larger than three millimetres (or one-eighth of an inch) in length it’s a fail.”

“Arranging and coordinating to become an approved site with the CWB was largely done by one Kenjgewin Teg’s key welding instructors, Dave Barnes,” said Director of Quality Assurance Beverley Roy. “Dave has been teaching with Kenjgewin Teg in its partner college programs in the trades during the past two years and saw that this was an opportunity worth looking into further.”

“While all learning is good, I also know that prospective employers of students want to know that they have met and know the ‘real skills’ that are applied in practice and on-the-job,” said Mr. Barnes. “Becoming an approved testing centre for CWB means we are enhancing the employability of our trades graduates during and after they have come to us at Kenjgewin Teg.”

“We hope and look forward to this being the first of many certifications from the CWB that the trades centre here at Kenjgewin Teg will be doing in the future,” said Dave Hall, manager of Kenjgewin Teg’s Anishinabek Skills, Innovation and Research Centre (aka the trades centre). “We work really well together here with all of our instructors and I wholeheartedly supported Dave as the welding instructor in pursuing us becoming an approved testing site of the CWB.”

The CWB group certifies companies, inspection organizations, inspectors and welding consumables through a review and qualification process to ensure that they meet the requirements for a variety of product and safety codes as well as standards. As the authorized national body for the International Institute of Welding, CWB provides several levels of internationally recognized certifications and qualifications for welding professionals along with certification for welding companies.

More information and an application to the programs offered at Kenjgewin Teg can be found online at kenjgewinteg.ca. 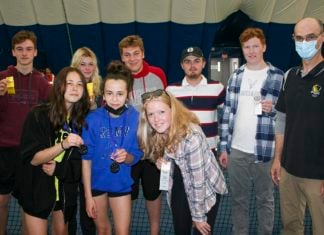