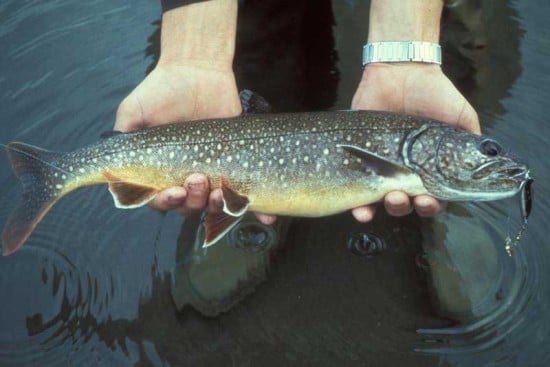 BURNT ISLAND – A catch of a lake trout recently by Purvis Fishery and what it had already eaten proves that this species of fish will eat anything, says the owner of the business.

“Have I got a story for you,” stated George Purvis, of Purvis Fishery this past Sunday. “The other day one of our fishing crews was out in the area (waters) and caught a lake trout. Once the fish was cut open in its belly was a full banana; it was rotten, but it was a full banana. It also had zebra mussels, alewife and a ling in it,” he told the Recorder.
The fish was caught in the North Channel by Mr. Purvis’s son Drew. Mr. Purvis said, “it just proves that lake trout will eat anything.”

Recently the Recorder reported Mr. Purvis in an article as saying that while the proliferation of zebra and quagga mussels into the Great Lakes has adversely affected the commercial fishery, lake trout have become more of a problem in affecting whitefish populations and that they eat everything.