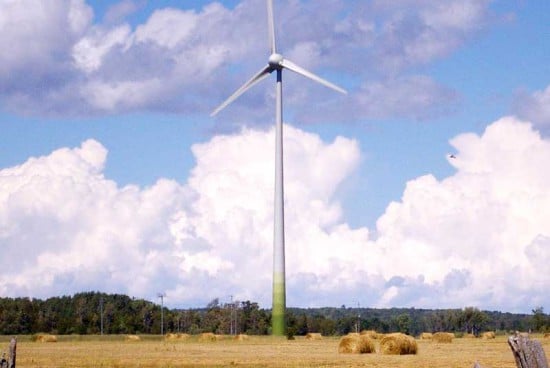 SPRING BAY—The sale of the Spring Bay wind farm has been completed between the previous owners Schneider Power Inc., with Leader Resources of Kincardine.

Charles Edey, president of Leader, confirmed earlier this week that the sale has been completed for a total of $1.5 million. He is no stranger to the area, having owned a cottage on Tracy Road in Spring Bay “for a long time.”

Mr. Edey told the Recorder, “we are a renewable energy development company, and I have been involved in the wind energy industry for the past 20 years, having been involved in Ontario’s first wind energy project near Trenton in 1994 (through Ontario Power Generation).”

The Spring Bay project consists of two Enercon, E48 turbines and has been in continual operation since 2007.

Mr. Edey said the wind farm will continue to create reliable wind energy for the residents of Ontario. “All of the power will be sold to Bullfrog Power of Toronto,” he told the Recorder. “We are not looking to expand the number of turbines (from two). It’s so onerous to expand with the environmental prework that has to be carried out. It is not our interest to put another wind turbine on the Island, and there are limitations to the grid for the Island.”

“This is not a feed-in-tariff contract, the power will be sold to Bullfrog Power,” said Mr. Edey. He pointed out, “we visited with all the neighbouring property owners before making the purchase and told them what our plans are. Everyone was happy with what we have planned.”

“We plan to do a meet your neighbours meet and greet event, probably in September,” said Mr. Edey. “Everyone around here probably knows me already, they see me around every weekend.”

Green Bush landowner upset no one called him about spill

Wind farm moves ahead on land and under water

Island philosopher weighs in on democracy and wind farms