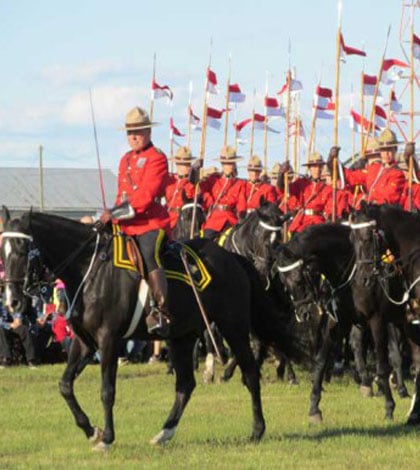 GORDON—One youngster in the crowd of 1,900 at the Royal Canadian Mounted Police (RCMP) Musical Ride Tuesday night seemed to sum up the feelings of everyone at the closing of the show.

“Aw, its over? They’re going home?” the youngster asked his mother, and when she replied that this was indeed the case, he said “Oh well, it was a great show.”

‘Great’ is a good word for it as the 1,900 people who packed the Gore Bay-Manitoulin Airport grounds would attest.

The 32 riders and their horses took the audience on a thrilling display of intricate military-cavalry movements to music with the Bridal Arch, Reeling Turnstiles, Swinging Gates, Form the Star, Wagon Wheel, Cloverleaf, Maze, Dome, Threading the Needle, Change, and several other moves.

The end of the show included In a Chord leading the crowd in the singing of O Canada and a march past in front of Gordon-Barrie Island Reeve Jack Brady.

RCMP Musical Ride Superintendent Marty Chesser had informed the crowd that “between 300-500 members of the RCMP apply for the 16-18 positions available on the Ride every year. We take anywhere from 16-18 each year and they are selected based on their riding ability and how they act in a team concept.”

“Those lucky enough to have gone through the initial stage of basic training go on (but by then some constables never want to see another horse again) and they are transferred to our training centre in Ottawa where they improve their riding skills from June to September,” said Mr. Chesser. The Musical Ride members started their current tour on June 1 and will return to Ottawa on June 24 where they will stay for two weeks and then go to British Columbia for eight weeks until September 8.”

“We have our own horse breeder in Packingham, Ontario,” he continued. “Our horses are the Hanovarian breed, their tempers are good, and the Hanoverian Society has impeccable breeding records. The horse will stay on the farm for three years and then go through a three year training program in Ottawa where the horses are exposed to all different types of venues.”

At six the horses are more mature, mentally and physically, said Mr. Chesser, who noted the horses can stay with the Musical Ride until they are 18-years-old, although they can, and have, gone on longer and are then used by young riders in their training.

“There are 32 horses in the Musical Ride and I will lead on Hector, who is 24-years-old,” said Mr. Chesser.

Equally impressive was the show put on by OPP Northeast Region Canine Unit, including dogs and handlers from the Espanola Police, Sudbury Regional Police, OPP, and one from the Ministry of Natural Resources. The officers on hand included Derry Mihell, Sergeant Scott Taylor, Barry Kelly, Micah Plourde, Doug Ward and Steve Edwards.

“Basically what we will be doing with the dogs is displaying their obedience skills and set up a couple of scenarios with a couple of guys who have been ‘poaching,’ as well as one bad guy who has a gun. The dogs show off their search techniques as well as for fish, guns and suspects. And they display takedown with bite apprehension techniques,” said Mr. Mihell.

The OPP Canine unit was formed in 1965, said Mr. Taylor, who pointed out the dogs receive 16 weeks of intensive training.

After the OPP Canine Unit show, dignitaries at the event had the opportunity to address the crowd. “This is magnificent,” said Jack Brady, reeve of Gordon/Barrie Island. “Good evening and thank you to all of you for coming out on such a beautiful evening.” He welcomed all members of the RCMP and members of OPP. “This event is all part of the celebration to help celebrate the 100th anniversary of the famous swing bridge. Best wishes on behalf of Gordon/ Barrie Island and NEMI.”

Al MacNevin, mayor of the Town of Northeastern Manitoulin and the Islands, confirmed, “this event is linked to the 100th anniversary of the swing bridge and the Bridge Festival taking place in July.” He explained that the Northeast Town was able to provide funding for Gordon/Barrie Island to put the event on through a grant from the Ontario Trillium Foundation. “I know you are going to enjoy the show a great deal. We had the Musical Ride in Little Current in 1984 and it was really exciting.”

“I would like to congratulate Gordon/Barrie Island council, there is an awful lot of work that goes into making this type of event happen,” said Mr. MacNevin. “We support you 100 percent.” He encouraged everyone “to come out to Little Current on the July 12 weekend to enjoy all our events, it will be a lot of fun.” He presented an official Swing Bridge 100th anniversary hat and a copy of a book of its history written by Bill Caesar.

“Volunteers, where would be without them?” said Ms. Barfoot. “We have had a fantastic group of volunteers who are helping out today. I would just like to thank everyone for their support.”

“It is an honour to be here today, one of the unique things about the Musical Ride is we visit some great small areas,” said Mr. Chesser. “When I saw Gore Bay on the schedule for this year I remember saying, ‘where the heck is Gore Bay and Gordon/Barrie Island?’ Now I think this is one of the best kept secrets in Canada. We are very lucky to be here and I hope we will be back some day.”

Along with the Musical Ride and canine unit demonstrations, there was a car and vehicle show held as well with a total of 13 vehicles on hand. And the food, well there were many different food booths set up, with everything from beef on a bun, fish and chips, pizza and much more available for all attendees. And if that wasn’t enough there were several vendors on hand displaying and selling their wares.

Mr. Morrell said, “on behalf of Gordon/Barrie Island council, the reeve and the recreation and culture committee, I would like to welcome everyone here this evening. I want to thank the RCMP for the great work in making their program possible and the many people involved in planning and organizing this event. A great big thank you and welcome to all of you.”

All the horses in the Musical Ride were housed from Monday at the barns owned by Lyle and Heather Strain in Gordon. The horses were brought in on the trucks at 2 pm. “The horses were off the trailers, cleaned up and fed and taken care of and the vehicles parked in 45 minutes, which was pretty incredible,” said Mr. Strain. Along with many adults visiting the barns on Tuesday, students from Assiginack, Central Manitoulin, Lakeview, C.C. McLean public schools and students from the Manitoulin Secondary School Life Skills program visited.

Constable Benoit Matteau of the RCMP told the Recorder, “as a rider this is a perfect venue, it is a really nice place to house the horses because they are all together in one barn. And everyone has been so friendly and hospitable. And it was great having the kids from the schools here. Everything was perfect.”

“This was great,” stated Les Osborne after the Musical Ride with his wife Gloria agreeing, saying it was “exceptional.”

“These guys and gals work hard for this and the horses were magnificent,” added Mr. Osborne. 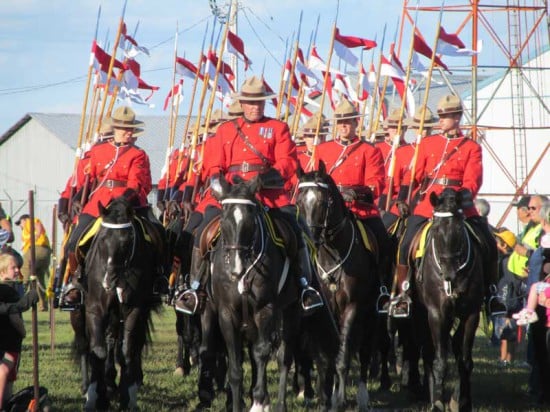