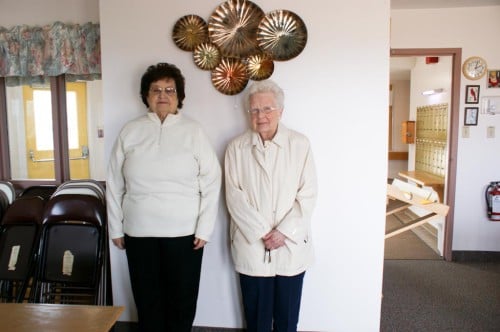 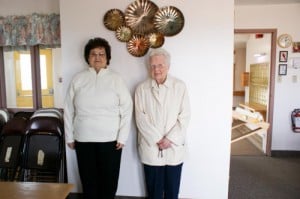 LITTLE CURRENT—Fifty years ago this April 12, 21 women signed their names to a sheet of paper to become the charter members of the Little Current Royal Canadian Legion’s Ladies’ Auxiliary.

Of those 21 women, only three remain. Donna Mackie, one of the youngest of the women to sign the original charter, moved to Espanola shortly after and became affiliated with the Legion there. Thirty-six-year-old Verna Heise and 35-year-old Peggy Patrick also signed, and though both women are now in their 80s, they remain active in the Little Current Legion’s Auxiliary.

“Oh gosh, we had a lot of laughs,” said Ms. Patrick, laughter colouring her voice. The two women spoke with The Expositor earlier this week.

The Little Current Legion Branch 117 opened in the 1960s at its current Vankoughnet Street location, though the building has since been expanded. Before that, the Legion met elsewhere.

“We decided the men should have a ladies’ auxiliary now that they had a hall,” explained Ms. Heise. “We have a plaque at the back of the hall honouring the 21 women who chartered the group.”

Things have definitely changed over the past half-century, both women agreed.

When the auxiliary was formed, it was the only way for women to become involved with the Legion. Women were not permitted to be legionnaires. That was the domain of men only, veterans of either the World Wars or the Korean war, or the father, son or brother of a veteran of those wars.

Similarly, membership in the auxiliary was open to women who were mothers, wives, sisters or daughters of veterans of those wars. As time progressed, grandsons and granddaughters were permitted membership in the respective organizations. Eventually, the restrictions were lifted entirely: any man could join the Legion and any woman could join a Legion Ladies’ Auxiliary. Over time, the rules were loosened more, and women were allowed into the Legion.

“Some Legions, due to membership, have closed its auxiliaries and rolled the remaining members into the Legion membership,” Ms. Heise noted, adding that the Little Current Auxiliary is still active with about 30 members.

Another thing that has changed is the kitchen. As the auxiliary supports the Legion through fundraising teas, socials and dinners, the kitchen was an integral part of the hall for the women who signed the charter or joined at a later date.

“You couldn’t swing a cat around,” added Ms. Patrick with a laugh.

Ms. Heise said eventually the Legion expanded the kitchen, but not after a few arguments about its size.

“I told them it was too small but they told me it was the same size as the kitchen in my home,” explained Ms. Heise. “Well, I wasn’t cooking for 100 people in my kitchen at home and I told them that.”

The first year the hall opened, the auxiliary held a Remembrance Day tea. While the event went smoothly in the hall, everything was not as copasetic in the kitchen, Ms. Patrick recalled.

“We charged 75 cents to come for tea,” Ms. Heise said. “People would show up in their furs and dressed up and they would be served tea from a silver tea pot. We still have that pot.”

In the kitchen, while water had been installed, the sinks hadn’t quite been hooked up. Dishes were being washed in bins of soapy water.

“We had this older woman, from the First World War, washing dishes,” said Ms. Heise. “She had her hands in the water washing dishes and a cigarette hanging out of her mouth.”

Added Ms. Patrick, “We kept telling people to close the door, so no one would see her smoking and washing at the same time.”

Since inception, the Ladies’ Auxiliary has functioned as the Legion’s right hand, supporting the Legion through fundraising events, event support and hall and cenotaph care.

“Auxiliary means helper, supporter, and that’s what we do,” Ms. Heise said, pride filling her voice. Her husband, Boyne, had been in the artillery during the Second World War.

“It was a very busy life,” said Ms. Patrick. She immigrated to Canada following the war from North Wales, along with her husband Donald, a Royal Signaler from Coventry.

“They really depended on us,” Ms. Heise noted. “We would be busy every weekend. The hall rental was very busy.”

The money the women raised went to support not just the Legion, but the community around it. In the past 50 years, the auxiliary has made donations to the hospital, the hospital auxiliaries, the Centennial Manor, community events, festivals and fairs, individuals in need, the bursary program at Manitoulin Secondary School and an internal bursary program.

A special anniversary dinner is being planned for April 28, the last Saturday of the month, revealed Ms. Heise.

“I’m a party pooper,” she warned with a laugh. “I don’t drink and I don’t smoke. But we’ll all get together and have a good time, I’m sure.”