Citizens need to express their concerns by every means possible

Kudos to The Recorder on its report last Friday covering the Central Manitoulin Health and Safety Committee discussion on pesticides. Both the Recorder and the Expositor have shown exemplary journalism in reporting on the Manitoulin public’s concerns about unnecessary pesticide use and spray technicians not following clearly documented safety procedures risking the safety of the public and animals.

In the Central Manitoulin Health and Safety committee meeting last Tuesday, committee members expressed various personal concerns they had about pesticides use, but finished up asking applicant Petra Wall to develop a petition and circulate it through Central Manitoulin before they made a decision. Petra of course agreed to do this, even though she was aware that petitions had been circulated Island-wide last year, and one in particular with more than 500 signatures had been sent to the incumbent Minister of Environment and Climate Change via MPP Michael Mantha.

While the Ontario government back in 2009 took away any decision making on pesticides away from municipalities via the Cosmetic Pesticides Act, it cannot stop those same municipalities expressing the concerns of their citizens via statements on the record that they wish to be pesticide free. Thanks to the efforts of Pat Hess in Billings, Billings council put such a statement on the record. Assiginack council declared itself opposed to pesticide use back in 2002, and I understand from a member of the current council that utilities appear to have respected that position since. Zak Nicholls has been patiently waiting for NEMI to schedule something similar, once Hydro One has time to appear to make its case. George Kopylov and a group of 30-plus individuals are waiting to approach Tehkummah council to present their concerns about a subcontractor to the MTO who appeared to be spraying pesticides while not following MoECC procedures.

The trouble is, during the latter part of her government, retiring premier Kathleen Wynne was forced to replace the minister several times following resignations of several prominent Liberal politicians leading up to the election, and this important concern was pushed down in priority while other political fires were fought. And of course, now we have a brand new government and who knows what its attitude will be towards tighter controls on pesticides use.

So, what do we plan to do, and what can others do, in these circumstances?

First, we will continue to inform interested parties and gather support via petitions etc. Second, with municipal elections coming in October, we will be contacting all candidates to find out what their position is on tighter controls on pesticides use and what their position is on asking the provincial government to re-establish municipalities authority to control this within their own jurisdictions. Third, we will ask councils to raise this issue via AMO (Association of Municipalities of Ontario) to premier-designate Ford’s government in a concerted effort to rebalance the sharing of authority. Fourth, we will resubmit our petition to the incoming Minister of the Environment when he/she is appointed. What follows are key points extracted from what we sent to the then Minister:

“…At that time, the Minister permitted some phasing of the current controls. 1. Hardware outlets and golf courses were permitted a 4 year phase in period to run down inventories and change practices. Nine years later, it is still possible to purchase banned pesticides like Round Up at hardware stores. It is not clear that golf courses have ceased using these products in their course maintenance practices; 2. Utilities like Hydro One and Bell (including MTO and MNRF) appear to have incorporated herbicide use as standard practice into their vegetation management practices on their rights of way, to reduce labour costs, rather than using pesticides only as last resort and only on noxious plants; 3. The strategy of replacing multiple municipal pesticide ban bylaws with a single “one size fits all/render inoperable” clause in the Pesticides Act is leaving municipalities with no means to respond to citizens’ concerns or to use their local knowledge to focus/limit use only where absolutely necessary. This must change! Municipalities are being forced by their citizens to declare themselves “Pesticide Free Zones” – even though the Pesticides Act has withdrawn any power they have to enact bylaws specific to pesticides controls of bans; 4. Meanwhile, evidence is mounting from all over the world that use of pesticides is causing serious health problems all the way up the food chain, including in agriculture, which was also exempted from many limits imposed by the current Pesticides Act. Other jurisdictions have already responded to these new revelations. [The EU has imposed a total ban on neonicotinoids, which kill bees. Health Canada is now reviewing its approvals for some currently approved pesticides.]; 5. The federal and provincial governments should develop a pan-Canadian accord on tighter controls on Pesticides use based upon the most current scientific evidence; and 6. First Nations communities are extremely concerned about what they claim is indiscriminate aerial spraying of pesticides on forest lands in their territories.

In summary, citizens need to express their concerns by every means possible. Pesticide manufacturers are very powerful and individually, we have little influence. But together, we can move our elected representatives to make sure they do the right thing!

Letter: A history lesson on what it means to be Indigenous in colonial Canada 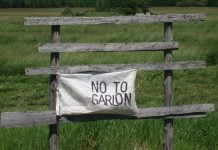 Eliminate the use of Garlon for removal of trees and shrubs, say petitioners

Letters: Rainbow District School Board students do the board proud

Letters: A tale of two towns

Letters: More emphasis on the environment needed in the current provincial election

Letters: More questions raised about the wisdom of Enbridge’s Line 5