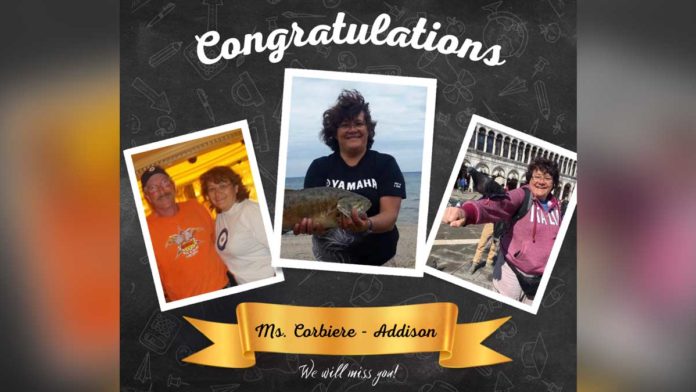 SILVER WATER—While already looking for new challenges after having recently retired, Lisa Corbiere-Addison certainly enjoyed her career as a teacher, both at the elementary school level and at Manitoulin Secondary School (MSS).

“I started teaching in 1992 at Lakeview elementary school where I stayed for a few years. In 1995, I began teaching at MSS and have been there ever since. As of December 21, I had been teaching at MSS 26 years. I had a blast, the students and staff were awesome,” stated Ms. Corbiere-Addison said of her 30-year career in education.

Ms. Corbiere-Addison pointed out she retired a year and a half earlier than she had expected. She was on family leave as of last September to assist her mother (the late Melvina Corbiere).

“Since then, I have been kind of scrambling, working at the shop during the day and helped my mother at night,” said Ms. Corbiere-Addison, who is co-owner of B.J.’s and Addison’s with her husband Lindsay, in M’Chigeeng.

“I am ready to move on to something else,” said Ms. Corbiere-Addison. “I’m going to get caught up here at the shop first. That’s my plan. Then I will see what is next,” she said, noting, “it might be in education but there are a number of avenues that I could look into. I am not in a rush to get there.”

Ms. Corbiere-Addison taught several different classes at MSS, among them business and careers, physical education, the Transitions program, dual credit co-op program through Kenjgewin Teg and she worked for several years with students at risk.

Over her career at MSS, “I was fortunate to go on many cultural exchange trips with the students, including a trip with students to Italy. We took class trips from the windmills in M’Chigeeng, canoe trips and the cultural exchange trip to Italy. I liked to get the students out of the classroom and learning about things outside the school as much as possible, to get exercise, learn social skills and lifelong activities.” She was also the MSS girl’s hockey team and golf coach for about 10 years.

“She always had lots of patience and understanding for her students, especially those who struggled. She had a calming affect on them,” said Mr. Wiwchar. “She was also there to help students in need of support. We are all going to miss her at MSS.”

With her retirement, “I have moved from having two jobs to one and for now I’m catching up on that job at the shop,” said Ms. Corbiere-Addison. “And I will be back to take on another role in the future, working in the community.”

“My fellow staff members at MSS have been very supportive over the years and with Dave Wiwchar as principal and Dawn Noble McCann and Neil Debassige as vice-principals, the school is in very good hands,’” added Ms. Corbiere-Addison. “I have always had strong family support in my teaching and coaching, from my four kids, and I would like to thank them and my husband Lindsay, my parents Ron and Melvina and my in-laws Lyle and Ann.”