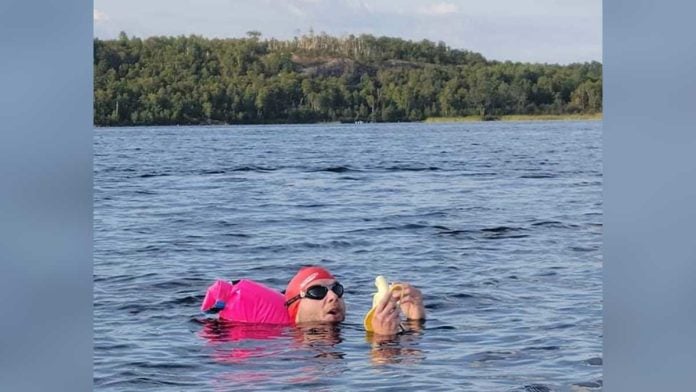 SUDBURY—A Sudbury man is planning to swim 350 kilometres around Manitoulin Island this July to raise funds and awareness for Multiple Sclerosis (MS).

“This July I will swim 350 kilometres around Manitoulin Island,” stated Mathieu Bonin. “I’m not sure I can achieve this, but I’m certainly going to try my best. I’m planning to start in Little Current and travel counter-clockwise (west) around the largest freshwater Island in the world.”

“I have a full team of experts to help during the training and on the swim, including a sports psychologist, therapist, nutritionist, strength coach and three swim coaches,” said Mr. Bonin. “I’m going through the best training I can to be ready.”

“Why would I dedicate my summer to swim in this cold, dangerous, turbulent and unpredictable water? I am swimming to raise funds and awareness for Multiple Sclerosis research,” stated Mr. Bonin.

“I swim to honour the memory of my Aunt Claire Poirier who passed away from this illness. I am swimming to bring hope to the people who are suffering from this illness, and to their loved ones. With my courage, I want to highlight theirs. I swim with the hope that one day it will lead to a cure. Believing something is possible is the first step in achieving it.”

“I am fairly new to swimming, I just started over a year ago,” Mr. Bonin told The Expositor. “I was an ultra-marathon runner but broke my foot last year and decided to try swimming instead.”

Last summer Mr. Bonin attempted to swim Lake Manitou (unsuccessfully) but did swim 20 lakes in the area. He swam Lake Wahnapitae, raised $12,500 in funds for NEO Kids in Sudbury, doing this in memory of a friend of his whose son, Evey Cacciotti, died at the age of three of a heart condition. His other swims all helped to raised funds for Camp Quality, for kids who have cancer.

“I am an open water swimmer and last summer I attempted a Lake Manitou crossing. Unfortunately, conditions got dicey, and I had to stop the swim for safety reasons,” said Mr. Bonin.

Mr. Bonin plans to swim eight to 10 hours per day around Manitoulin. “That is like swimming Lake Wahnapitae every day,” he noted.

“Last summer, my friend Richard Bradley cycled around the Island (a total of 350 kilometres). I drove along in a car,” said Mr. Bonin. “Then in August Simon Benoit, an ultra-marathon runner, ran 100 kilometres in one day on the Island. I loved the energy of that day, I was going to run with him but broke my foot and decided to swim instead.”

“I’m expecting it will take about a month to swim the Island,” said Mr. Bonin. “I will swim during the day and then sleep on a boat at night. I have a world-class training team, but I am still missing a key ingredient—a support boat and captain. I am looking for an experienced captain who knows the waters well.”

“I would love the local residents to rally around this cause for MS,” said Mr. Bonin. “I’m hoping to complete the swim around Manitoulin and give inspiration to anyone who has MS. I swim with the hope that one day it will lead to a cure. Believing something is possible is the first step in achieving it.”

“My purpose is my greatest driver when times get tough,” said Mr. Bonin in a Facebook post. “If you or a loved one has MS, or you lost someone you love to MS, you can share with me your story at msmanitoulinswim.@gmail.com You can include pictures, and if you give me your permission we will add it to our website www.msmanitoulinswim.com to show the many faces of MS.”

“The goal is to raise funds for the MS Society of Canada. I hope this swim shows we can achieve the impossible and that this leads to a cure for MS,” wrote Mr. Bonin. “I would appreciate your generosity in making this dream a reality. You can donate using the following link, or you can organize a fundraiser and give to the cause; https://msspwcms.donordrive.com/index.cfm

“I usually get to the Island once or twice a year,” Mr. Bonin told The Expositor. “I felt in my heart I wanted to swim the entire Island; it is such a beautiful place.”