LITTLE CURRENT—Big screen LED displays have become de rigour at music festivals and other large scale events, but for organizers in Northern Ontario cost has always proven to be an almost insurmountable hurdle. That mountain has now been reduced to something of a molehill by local entrepreneurs Craig and Kelly Timmermans, organizers of Manitoulin Country Fest (MCF), a popular country music festival, and now the latest rock music addition to the Flat Rock Entertainment roster Rockin’ the Rock.

“We were renting video panels from companies in Toronto or Montreal and the cost was enormous,” said Mr. Timmermans. “Typically we would spend $18,000 over the course of MCF weekend.” In addition to the cost per 2-foot by 2-foot panel that ranged in the $180 a day range, there was the cost of hauling enough panels and their controllers up (and back) from down south to be added into the mix.

With a little help from government funders (that will likely remain nameless until after the current provincial election) the duo were able to purchase enough of the panels and controllers to build a single 24-foot by 18-foot panel or a couple of panels of different size configurations.

“These are the highest definition LED panels on the planet,” said Mr. Timmermans. “They are the number one panel for outdoor use. It can be a bright summer sun shining directly on them and they are still bright as day. Unlike projection models, which the company has experimented with over the year, the panels are not washed out in the daylight hours. “With the projection screens you couldn’t really make them out even when it was pretty well dusk. They only worked in the night.”

The new LED panels will provide a welcome revenue stream for the production company as the plan is to rent them out when their own festivals are not utilizing them.

“We are the first video wall company in Northern Ontario,” said Mr. Timmermans, “and we plan to make it more affordable.” Typically, the panels rent out for upwards of $100 per day, plus shipping. “We are planning to offer them for $40 a panel per day, and when it comes to shipping them we have our own trailer that we can bring the equipment to the site, as long as it isn’t too far away, like Sudbury.”

In addition to festivals, the applications for the video walls include municipalities that might want to use them for temporary announcements like road closures and emergency announcements or businesses looking for an innovative marketing edge.

Mr. Timmermans was sporting more than a bit of sun as he chatted with The Expositor.

“Yeah, I got a bit of sun lately,” he admitted. “We just spent the last week up on the mountain pouring pads for the new radio tower.” That tower will loom 450-feet above the skyline, extending the reach of the couple’s radio station by an exponential level.

“There are three pads,” explained Mr. Timmermans, “they will each take 12 square metres of concrete. Most towers they just drill holes and put in rock bolts, but this tower is a lot bigger.”

An earlier attempt to drill at the site hit natural gas at a depth of about 20 feet, also hindering that option.

“It’s just another day in the life,” said Mr. Timmermans, shrugging off the challenge. In the meantime, the inveterate serial early technology adopter is looking forward to an opportunity to play with his newest acquisition—the video wall. “It’s going to be neat,” he grins. 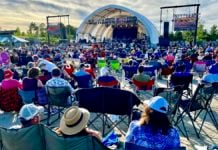 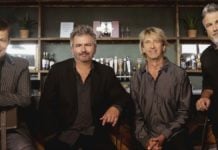