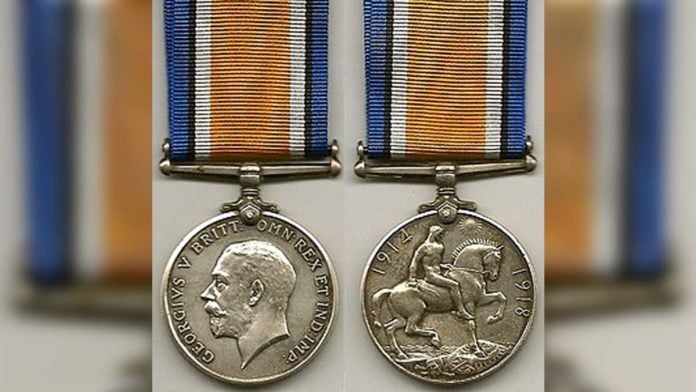 LITTLE CURRENT—The late Eric McConnell of Little Current spent many years working on the railroad, travelling regularly between Mactier and Sault Ste. Marie. One day he looked down and to see a glint of silver reflecting the sun alongside the tracks. Bending down for a closer look, the railroad man discovered a heavy silver disc bearing the image of King George V on one side and a man on horseback on the other.

Mr. McConnell drilled out the pin on the medal and attached it as a keepsake on his keychain and there it remained for decades.

“I was going through things a little while ago when I came across this thing,” said his wife June, who brought the medal down to The Expositor office to see if the newspaper could shed some light on her husband’s discovery. At first it was thought that the medal might be a form of death penny, those memorial plaques given out to family members of the fallen after the First World War.

The medal bore a well-worn inscription with J.M. Emerson along its edge.

The Expositor reached out to Bill Mullen, a First World War history buff who has made it his mission to repatriate Victoria Cross medals back to families and the communities of their recipients. Mr. Mullen has a secondary hobby of ensuring that World War veterans are properly recognized on the memorials standing in each community.

“First of all, it is not a death penny,” said Mr. Mullen after examining the photographs sent to him by The Expositor. “It is a British war medal.”

Ms. McConnell had enlisted the aid of local genealogy enthusiasts who discovered a fair bit from the medal, confirmed by Mr. Mullen.

The original recipient of the medal, John Miller Emerson, 37, was a Hungerford farmer who was killed in action at the seminal Battle of Vimy Ridge near Arras, France on April 4. He was a member of the 42nd (Belleville) Battalion, 3rd Division of the Canadian Expeditionary Force. He was born in Hungerford, Ontario, not far from Tweed, the son of James W. Emerson and Isabella Purvis Emerson. He was buried in Bois-Carre British Cemetery in Pas de Calais France. The cemetery is located about seven kilometres north of Arras, about a half mile east of the village on the south side of the D49 road to Bailleul-sire-Berthoult. He is commemorated on page 234 of the First World War Book of Remembrance.

John Emerson’s last known relative, at this point, was his brother Thomas, who passed in 1976. The Expositor has reached out to an historian with the Tweed branch of the Royal Canadian Legion in the hopes of finding living family members. Mr. Emerson was single when he fell at Vimy, so direct descendants are highly unlikely.

With the Purvis name being a familiar one on Manitoulin Island, perhaps there may even prove be an Island connection—which would be quite a remarkable coincidence given the medal’s travels through the years.

The Expositor will keep you posted.