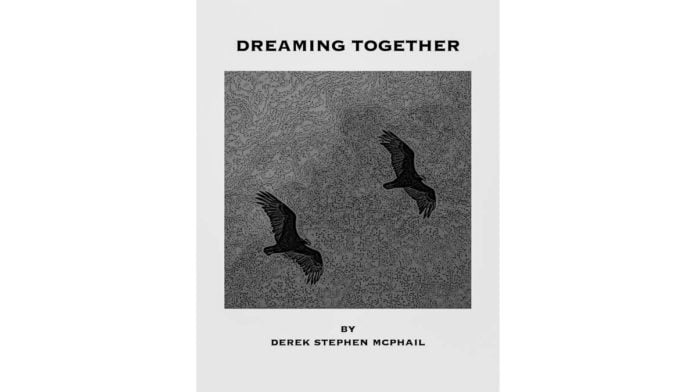 ﻿MINDEMOYA—Forty years ago, Derek Stephen McPhail was living in Collingwood, working at a shipyard as a fitter-welder and volunteering at a local cable television station. A newspaper article about a nearby archaeology dig started him on a long journey that has culminated on Manitoulin Island. Mindemoya is where he finally wrote ‘Dreaming Together,’ the first book of a trilogy originally inspired by a half-acre archaeology site on top of Blue Mountain.

Mr. McPhail and his friend, Brian, who ran the local cable television channel, approached the archaeologist to see if he would be interested in having a film crew come out. Charles Garrad, who would become a good friend of Mr. McPhail’s, was delighted, Mr. McPhail told The Expositor.

Over the course of his career, Mr. Garrad and several volunteers catalogued over 90 archaeological sites in Ontario, some in the Blue Mountain area where Mr. McPhail first encountered him. He discovered the Petun village remains in Craigleith and discovered archaeological evidence in the area that shows Blue Mountain was once the home of an ancient race of Petun Indians who eventually migrated to Oklahoma and Kansas and became the Wyandotte Nation. One of Mr. Gerard’s many honours was the Order of Ontario, which was awarded to him in 2012.

That is to say, ‘Dreaming Together’ is rooted in history. The book is set in the year 1649, during the time of Jesuits and the smallpox epidemic that largely wiped out the Wendat people. The people who lived in the Collingwood area were Wendat. The French called them Petun, which is a French word for tobacco.

All the Wendat didn’t die from smallpox, Mr. McPhail explained. “A lot of them were assimilated by the Iroquois (who were also Wendat). Some did travel west into Michigan and were forced further south. There’s actually a Wyandotte band in Oklahoma. Some might have gone back to Quebec.”

There’s evidence that they came from Mexico after large comet fragments hit northern Canada and northern Europe about 9,000 years ago, said Mr. McPhail. After the land recovered from that event, many people who had not been affected migrated north from Mexico and Central America. Mr. McPhail spent time in Mexico, Central and South America and was fascinated by Toltec philosophy. It seemed to be identical with the philosophy of North American Indigenous people of the time.

“It seemed like there was a real connection there. Only recently have archaeologists and historians started to figure it out,” said Mr. McPhail.

He is influenced by South American magic realism and liked the idea of incorporating the mythical people and creatures that formed part of the folk legends of the Wendat people into the story. His extensive research is evident in the characters, in their dialogue and their spirituality. It is also evident in his portrayal of the Jesuits.

“I tried to be really moderate about this Jesuit character,” he said. “I don’t want to be overly explicit. My intention was not to get too detailed about how horrible these times might have been so it’s more in the reader’s imagination of what he did.”

He acknowledged the risk of offending readers and that certainly wasn’t his intention. “At the same time, it’s an elephant in the room. I can’t pretend these things didn’t happen.”

Mr. McPhail would really like to see the book translated into Anishinaabemowin and made into a feature film in the language with English subtitles. He is looking into funding to have the work translated and then recorded as an audio book, which would be helpful for non-Anishinaabe speaking actors. He has approached Canada Council for the Arts about pre-development funding which would include translation and audio recording; there is a March deadline for submitting a completed application. He would like to keep production local, with local Anishinaabe actors and production services.

Mr. McPhail was born and raised in Sault Ste. Marie, Ontario. “Both of my parents are mixed blood but neither have status,” he said. He is related to the Pine family of Garden River through his father and his mother’s family is part Haida. “I always thought my Pine family relatives had lived forever in Garden River, just outside of Sault Ste. Marie, but it came up they’d only been there a couple of generations. Before that, they’d come from M’Chigeeng,” he said.

His father and grandfather spoke Anishinaabemowin, he said. In fact, his father spoke four languages: English, French, Gaelic and Anishnaabemowin. “It was my mother who was shamed for having Native ancestry when she was sent to residential school in Victoria,” he said. “We only spoke English in the household. My father didn’t stop communicating with all his friends who spoke other languages. It was my mother who was shut out of this big part of my dad’s social life.”

He doesn’t blame his mother for not giving him the opportunity to learn the other languages that his father was fluent in, but it is a large part of why he’s not willing to let go of the idea of having the work translated.

Mr. McPhail has a theatre and film background and utilized this when writing ‘Dreaming Together’ in screenplay format. He attended Ryerson University in Toronto twice, first for theatre studies and later to study film, obtaining a Bachelor of Fine Arts. He worked for many years as a carpenter building sets for professional theatres in Toronto.

About five years ago, he experienced some health issues after he was exposed to toxic mould and asbestos at a jobsite. “I got this neuropathy where the tendons in both hands roll up. As a professional musician I can’t play the guitar. I was a wood carver and I can’t do that. I can’t work as a carpenter but I can type at a computer,” he said. He decided to move back up north and ended up renting a house from a friend in Providence Bay. “I’ve been very excited living on Manitoulin and I’ve made some wonderful friends,” he said. He has lived in Mindemoya for the past year.

He has completed a draft of book two, another love story with the same two characters but set in Collingwood in 1980. He also has completed an outline for the final book of the trilogy. Purchase ‘Dreaming Together’ at The Manitoulin Expositor office in Little Current, or online at Amazon or Indigo in Canada.