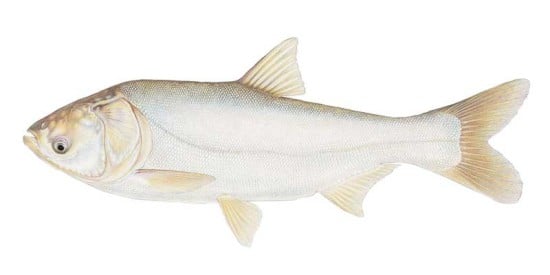 ONTARIO—Local representatives are in support of a provincial proposal to only allow gutted Asian carp into the province to prevent the introduction of the Ontario ecosystem intruder.

“It is high time they are going to be doing something, I’m just hoping it isn’t too late,” stated Jim Sloss, chair of the United Fish and Game Clubs of Manitoulin UFGCM.

“Straight barring them from Ontario is the best thing they (Ministry of Natural Resources) could do; I’d be inclined to ban them, but this is a start,” said Mr. Sloss.

“I’m glad they have started the process to have this happen,” said Mary Muter of the Sierra Club of Ontario. “I read of another attempt by someone to import live carp into the Great Lakes. Fortunately, authorities stopped it.”

“This should have been done years ago,” stated Mr. Sloss. “There is currently not an adequate system to prevent them reaching the Great Lakes and Lake Huron. If they’ve moved up the Mississippi River system they are most likely on their way to Lake Huron if measures aren’t taken to prevent this.”

A discussion paper was released by the MNR as of January 7, noting it is illegal to possess, buy or sell live Asian carp in the province. However, almost 175,000 kilos of Asian carp was imported in 2011 as food, and the fish arrives at the Ontario border alive in holding tanks full of ice, the MNR says. In some cases cargoes have been seized because fish were still alive at a provincial border crossing.

The MNR discussion paper reports, “experience in the US has demonstrated that it is virtually impossible to eradicate Asian carp once they have become established within a waterway. Prevention is the key and fisheries experts agree there is only one way to be really sure that these fish are dead when they get to the border; to eviscerate them by removing their internal organs.”

The MNR indicates that Asian carp have been heading north through US waterways and that bighead carp and silver carp are now an imminent and very serious threat to the Great Lakes. Asian carp are voracious consumers, eating up to 20 percent of their body weight each day, and can grow to reach more than a metre in length and 40 kilos in weight,” an MNR backgrounder says. “Bighead and silver carp eat plankton—the very foundation of the food web.”

The MNR discussion paper also noted that as well as the possible impacts on the province’s fishing industry, Asian carp could impact recreational activities as well. “Certain types of Asian carp are also a hazard for boaters and water skiers. The vibration and sound of boat motors can cause silver carp to jump up to three metres out of the water, damaging property and seriously injuring those nearby. One woman was almost killed when she was knocked unconscious from her personal watercraft by a flying silver carp in a US waterway,” the MNR report says.

Mike Wilton, of the water committee with the Manitoulin Area Stewardship Committee, said “I strongly support the province’s proposal concerning Asian carp, but I suspect they are already in the Great Lakes based on everything I’ve been reading and no one has taken the institutive of putting up barriers to keep them out of Lake Michigan.”

“The ministries can study and have committees look at the issue of carp, but the carp aren’t studying—they are swimming toward our water bodies,” stated Mr. Wilton.