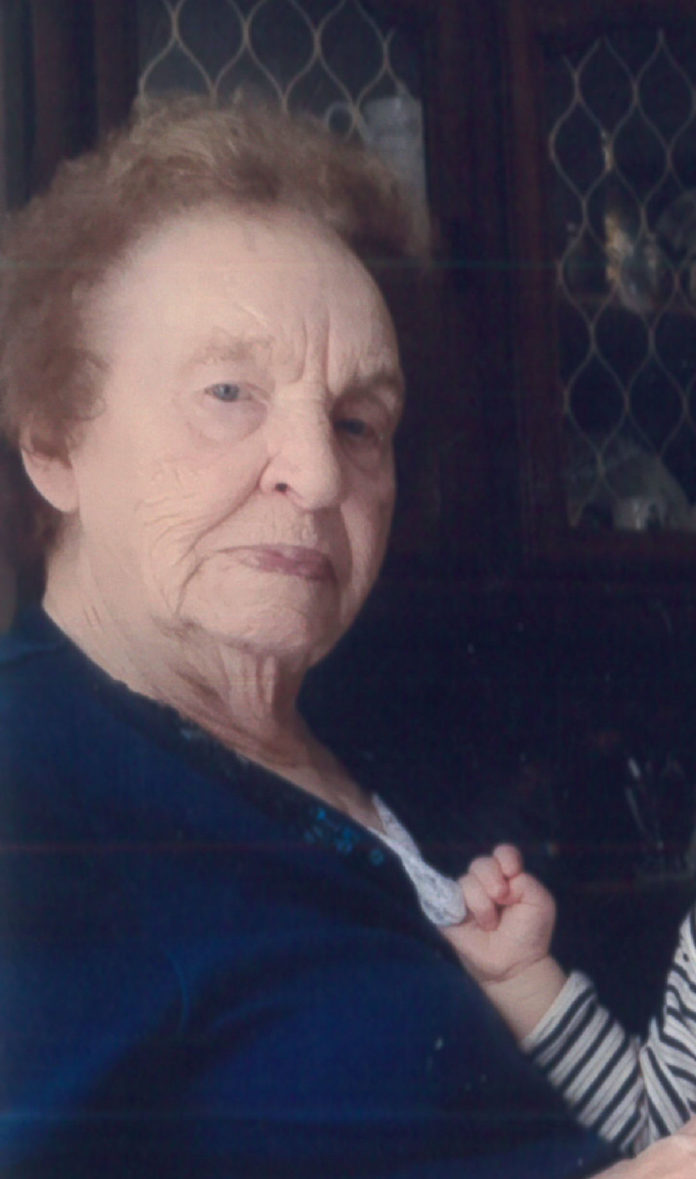 “LORRAINE” NORMA LOREEN EADIE
(nee Freeman)
May 9, 1932 – July 6, 2021
In loving memory of “Lorraine” Norma Loreen Eadie (nee Freeman). Lorraine’s greatest wish to move on from this life was finally granted on July 6, 2021. Born Norma Loreen Freeman in Tehkummah, she decided at a young age that neither name suited her and decided to go by Lorraine, an early indication of the steadfast woman she would become. Addressing her as either Norma or Loreen resulted in a stony silence and the ever-famous gramma look of disapproval. Predeceased by her husband Edward (Ted 2021), son Barry (1971), infant granddaughter Michelle (1972) and by parents Ernest and Mildred (Russell) Freeman. Also predeceased by brothers Larry, Lynn and Dick and sisters Gelena, Beth and Margaret. Survived by brothers Earl and Conrad (Judy) and sisters Marion Case, Brenda Robinson and Myrna Beaton. She will be missed by Everett (Verna), Darrell (Spike), Joanne (Michael) and Jack; by grandchildren Casey, Jillian (Ben), Ted (Megan), Chris (Meagan) and Phillip; by great-grandkids Lukas, Leif, Fenway, Orin and Eden. A life of many trials and multiple health issues helped frame her as someone who was tough and strong-willed with a determination that often bordered on stubbornness. A fighter and feisty woman to the end, she freely gave advice and opinions whether desired or not. She had an enduring memory and was relentless in her resolve. She was the matter of fact-call it as you see it kind of woman. The granddaughters often received advice on their looks and hair or were questioned about fashion choices and in her eyes fashion faux pas. Still trying to get a rise out of her, one granddaughter even wore ripped jeans on her last visit hoping for one last response. Cooking and baking skills were honed working alongside her sister and best friend, Gelena. As a young woman she worked in the kitchen at St. Joseph’s Hospital in Little Current. As a young mother of five these skills were necessary to prepare food daily and bake six loaves of bread every second day. Culinary skills came easily to her and her response to a request for any recipe was oh it’s easy. In reality she seldom followed any written recipe. Grandkids viewed Gramma’s house as a kind of convenience store as it was always amply stocked with chips, pop and candy. Family holiday dinners were a highlight featuring items like pies, rolls, homemade fudge and Christmas puddings as well as homemade preserves of pickles, carrots and beets. You never left the grandparents’ house without a full belly. Her love of the grandkids was evidenced by her playful interactions, games and tomfoolery. The boys were having a lark ringing the doorbell and running before she could get to the garage door. However, she waited patiently in the garage for the next ring and caught all the culprits but one. The girls will remember being carried across a wet spot in the field because only one of them needed to get wet. She put aside her fear of dogs and dislike of cats to welcome grandkids’ pets into her home. Although she was a tough love kind of woman, there was never any doubt how much she truly cared. As her family grew, she once again entered the workforce. She worked at Smith’s Gift Shop and Catalogue Sales, the Sunset Motel and ultimately at Manitoulin Centennial Manor in the laundry. The family wish to thank Dr. Poenn for his many years of care. Her last months she was cared for by the staff of Manitoulin Lodge and Manitoulin Centennial Manor. The family commends the staff in both facilities for their care, compassion and understanding. Doctors Wilson and MacDonald provided excellent end of life care. If so desired, donations in her memory may be made to Manitoulin Centennial Manor Auxiliary. At her request there will be no service. Cremation has taken place. Please share your thoughts, memories and photos at IslandFuneralHome.ca.

Expositor Staff - July 22, 2021
A swimming advisory has been issued for the following beach: Monument Road Beach, Lake Mindemoya As a result of routine water samples exceeding the acceptable bacteriological...