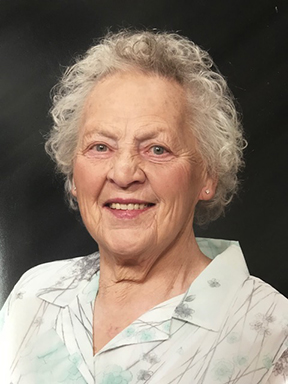 Madeline Lane of Lively and formerly of Gore Bay, passed away peacefully with her family by her side on Friday July 13, 2018 in her 91st year. Madeline was kind, loving, and generous with her time, whether it was family, friends, or even strangers. She was an Avon representative. She volunteered at the CNIB Eye van, and the Manitoulin Lodge. She was a member of the United Church, Women’s Institute, the United Church Women, and the TOPS Club. In 2000, she received the Senior Citizen of the Year award from the Town of Gore Bay. She kept in touch with greeting cards. Family and friends were always remembered on their birthday, anniversary, and many other special occasions. She showed a genuine interest in people, and she had a smile that filled the room with joy. Beloved wife of the late James Lane for over 59 years. Cherished mother of Vivian (Curtis) Chipman, Marilyn King (David Waugh), Linda (Ivan) Pindar, Glen (Valerie) Lane, Marie Firlotte and mother in law of Evelyn Lane. Madeline will be sadly missed by her grandchildren Sherry (Andrew), Brian, Christopher, Kaysha, Daelyn, James, Megan, Heather, great grandchildren Macarthur, Cameron and Theodore as well as her sisters in law Kathryn Waddell, Evelyn Lane, Bessie Lane and Maudie Powell, brother in law Robert (Debbie) Lane and many nieces, nephews and cousins. Predeceased by her parents Francis and Bertha (Faint) Rumney, son Ross, 7 siblings, and brothers-in-law Lloyd Lane and Barry Powell. A Celebration of Madeline’s life will be held at the Lyon’s Memorial United Church on Friday, July 20, 2018 at 11 am. Interment Gordon Cemetery. In lieu of flowers, memorial donations may be made to the Lyon’s Memorial United Church, Trinity United Church, Gore Bay Medical Centre or the Maison McCulloch Hospice as expression of sympathy and may be made through www.simpsonfuneralhome.ca