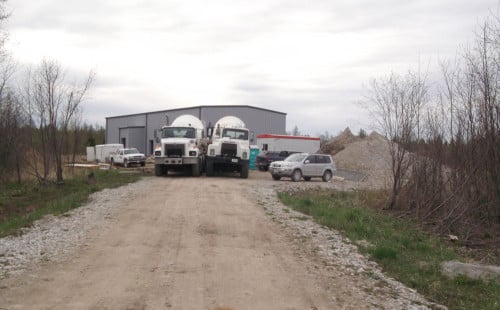 Birgit Martin, chair of the MICA board of directors, said at a meeting last week, “as Mac Emiry pointed out, we had hired Coldbox Builders last year to carry out construction of the building. The physical construction part of the project will be done this week,” followed by the waste water treatment system being installed after that. “The actual official opening of the abattoir will probably take place some time in November.”

Ms. Martin said in a release that has gone out to all MICA members this week, “We appreciate the support and patience of our members and the community at large during the building project. It has been an involved and complicated process and the builder has experienced numerous delays. As a board we have been equally frustrated by the lengthy process as we have been proud of the resulting state of the art facilities.”

Ms. Martin further pointed out MICA has purchased Papa’s Meats and Joan and David Brady have been hired as the manager and assistant manager for the abattoir. “And as we move forward, Joan will be doing the coordination for the kill schedule at the abattoir.”

While an open house will take place soon for MICA members and stakeholders, Ms. Brady said “there will be a public grand opening held later, maybe in the spring, perhaps in conjunction with the launch of the ‘Pure Island, Pure Taste’ brand.”

The MICA release points out that there are several benefits to having an abattoir open on Manitoulin Island. “A kill and chill facility on Manitoulin allows local producers to easily and economically access slaughter and realize savings in shipping charges and less environmental impact of shipping shorter distances; charges a competitively priced processing fee, allowing producers to improve their margins and add value to their meat products by selling at the gate or farmers’ market, potentially doubling the return on cattle sales. It will allow local processors to access Manitoulin beef, pork and lamb at competitive prices and it will also allow them to serve the growing interest in local food; increase processor revenues for increased cutting and wrapping services; and will anchor the value chain which will develop the Pure Island, Pure Taste brand to showcase and sell Manitoulin raised meats both on and off the Island.

As well, the abattoir will increase the demand for local meats and result in increased investments in herd growth and agriculture in general, resulting in a more stable agricultural sector, MICA notes. “It will allow the processing of cull cows providing additional ground beef to support the summer barbecue trade. This and the branded Manitoulin meat products will compliment the thriving tourism industry on Manitoulin Island, and the local community will benefit as each dollar earned from direct agricultural sales result in additional benefits of $1.30 to the local economy.”