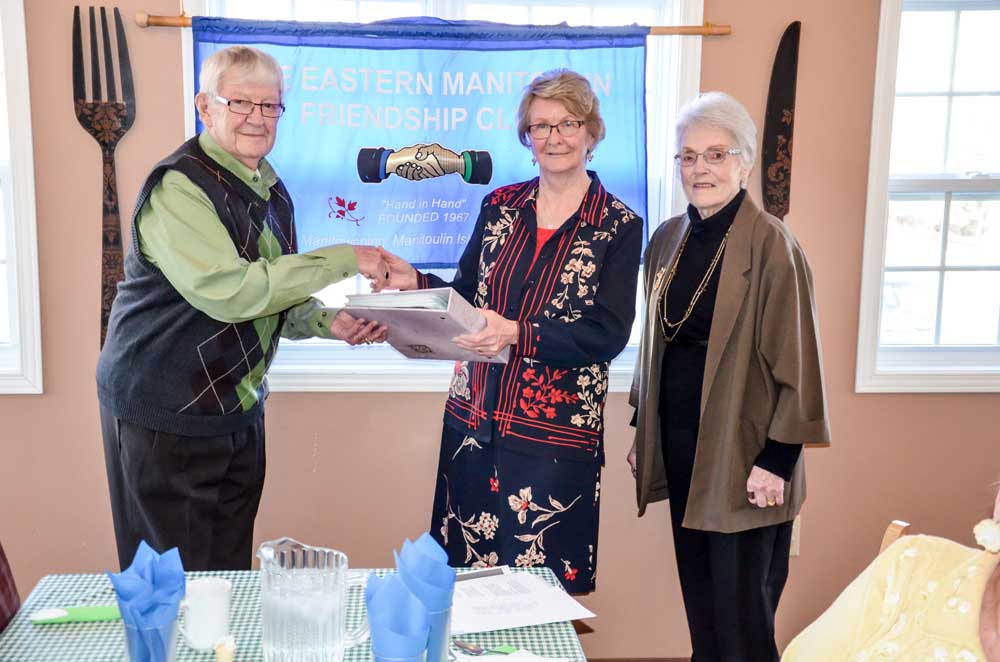 MANITOWANING—It has been a great run, but with dwindling numbers and a change in society’s culture, the Manitoulin East Friendship Club has decided to close down operations. In a bittersweet ceremony held at Green Acres in Sheguiandah the club handed over its collection of memorabilia, contained in dozens of scrap books and photo albums to representatives from the Township of Assiginack and the Assiginack Museum.

“It is unfortunate,” said Club President Marilyn Smith, who noted that the club, whose signature motto was “Hand in Hand” and exemplified with an image on the club banner of two hands clasped in friendship, was first formed in 1967. “We lost our only remaining charter member, Thelma White, in 2014.”

Ms. Smith said that the club members, although dwindling in number in recent years, did not want to close the doors while Ms. White was alive.

“We have a wonderful community for volunteers,” she said, noting that Thelma Chatwell had kept the photo albums containing not only photographs, but news clippings and other mementoes of the activities of the club down through the years.

The Manitoulin East Friendship Club had plenty of activities to record down through the decades, particularly in regards to the community’s medical centre.

The Manitoulin East Friendship Club was organized in 1967 under the guidance of Reverend Harold Kempling, the minister of Knox United Church, and his wife Norma, assisted by Anne Ste. Jean whose husband taught school in Wikwemikong,” said Ms. Smith during the closing ceremonies. “The group was sponsored by the Royal Order of the Orange Lodge, Purple Hill L.O.L. #1364, Men’s and Ladies Orange Benevolent Association Pride of the North #1056.”

The original charter, she explained, was obtained by Robert Hembruff of the Men’s Lodge along with Irene Martin of the Ladies’ Lodge. “These were the co-signers for the new club. The age limit was set at 55 years of age and up, thereby not limiting it to sen iors.”

In 1974, the affiliation registered with the Senior Citizens of Ontario and this is renewed every year at $1 per member. The first executive was comprised of President Robert Montour, Vice President William Dinsmore, Secretary Treasurer Irene Martin and Anne Tilson and Thelma White programme committee and lunch convenors. Meetings were held at the United Church Hall on the second and fourth Wednesday of the month, excepting July and August.

Activities at the club encompassed bus trips, quilt making and card games, while among the charitable donations by the club was a steam table for the kitchen of the United Church Hall. Both Thelma White and Mary Pryslak were presented with a 25-year pin. A monthly newsletter, ‘The Voice,’ was mailed to members. It contained information about many issues concerning seniors all over Ontario, including affordable housing, transportation difficulties, parking fees for seniors at hospitals, health care, pensions and “other matters which affect us all.”

Among the perks enjoyed by members was a monthly birthday cake and often monthly dinners with members and their spouses. All meetings started with the Lord’s Prayer and the singing of O’ Canada, followed by story time where different members would share a joke or a reading with everyone.

“In fact, one time Harry (Jaggard) must have run out of stories and decided to sing us a song,” she said. “Then we would adjourn and play games or cards for the afternoon.”

“They have been a wonderful part of our community, it is really sad to see the club ending,” said Assiginack Councillor Hugh Moggy as he officially accepted the club’s historical documents on behalf of the municipality and the museum.

Ms. Smith explained that the club’s members had been dwindling due to age and the lack of newer members coming into the club and it was decided to close it down. 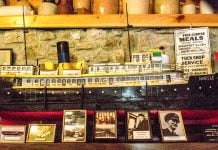