MANITOULIN – Ontario’s current nursing shortage is a crisis of epic proportions. Last November, the Registered Nurses Association of Ontario (RNAO) told Premier Doug Ford in an open letter, “the shortage of registered nurses (RNs) in our province has reached a crisis and is spiraling out of control.” The RNAO has estimated that “Ontario entered the COVID-19 pandemic nearly 22,000 RNs short of the rest of Canada, on a per capita basis.”

At a press conference on January 11, Christine Elliot, Ontario’s deputy premier and minister of health, announced that internationally trained nurses will be allowed to work in Ontario hospitals and long-term care facilities to ease staffing challenges intensified by the COVID-19 pandemic.

The internationally educated professionals will be deployed “where extra help is needed,” said Minister Elliott. The province will run the program with Ontario Health (which oversees healthcare in the province) and the College of Nurses of Ontario.

Mr. Vine hopes the initiative brings more personnel into the system but added, “We know that across the province, there are thousands of vacancies for nurses. It’s not likely to be a panacea.”

MHC has “quite a few” vacancies in the organization on the nursing side. “Our staffing pressures are not all caused by vacant positions,” he noted. “We have some folks who are away due to illness and some long-term issues. Those create difficulties in backfilling, especially when we don’t know the duration.”

There aren’t a lot of nurses out in the community who are applying for these positions but acknowledged Director of Human Resources Samantha Smockum for her diligent work to get all positions filled.

“The hospital is a cross-section of our broader community so it’s very likely that we’ve got folks that are isolating due to COVID-19 exposure that’s causing the challenge, but we also fall prey to other types of illnesses that happen within the workplace,” Mr. Vine said. Someone could be isolating because of COVID, “but maybe they have an injury because they’re working short, or maybe they’re off with a mental health issue that was exacerbated by the stress and tension of the pandemic.”

Family physician Dr. Stephen Cooper has seen those shortages first-hand during his shifts at MHC. “I do know that the nurse managers were putting on their scrubs over the Christmas holidays and joining the front lines. That’s not what they signed up as. They signed up to be administrators, not nursing staff, but they’re being pressed into work.”

“Over the last 20 years that I’ve been involved in medical leadership, the College of Physicians and Surgeons Ontario (CPSO) and the ministries have opened the door to getting more physicians and that is making a big difference in access to physicians in Ontario, so it does help,” Dr. Cooper said.

It’s a short-term solution, however, he noted. “We need to think about these things in advance. The career of a clinician is 30 to 40 years. If you bring in lots of foreign-trained clinicians, that’s reducing opportunities for students in the North and across Ontario in the long run. In the short run, it’s a great solution. In the long run, we missed an opportunity 10 years ago.”

“We’ve got to work more closely with our partners like ONA (Ontario Nurses Association) and post-secondary institutions in order to have a more robust healthcare human resources strategy for the province to make up these shortages,” Mr. Vine said.

The ideal long-term solution would be opening up additional training spots in Ontario, but there’s a caveat: it takes a great deal of planning and thinking about where you want to go, explained Dr. Cooper. Healthcare has changed a lot in the 29 years he’s been practicing. He tells his students that what they’re learning and doing now is going to be completely different at the end of their career in 30 years time.

“I don’t know what the numbers needed in the future really are,” he said. “There have been a lot of changes in healthcare over the past 30 years but we can expect that in the next 20 years, there’s going to be even more change in the way healthcare is delivered and the roles of physicians and nursing staff will change greatly.”

One thing that won’t likely change is nursing and bedside care, he believes. “We can think all we want about what the future of medicine is going to look like but we will need compassionate hands at the bedside and the people that are skilled staff delivering that, which is what a lot of front-line physicians and nursing staff do. That part won’t go away.” 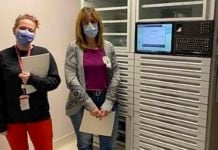