﻿﻿Karlene Scott retires from the high school after 42 years

MANITOULIN—Manitoulin Secondary School (MSS) will be starting the new school year without one of its most familiar faces in the front office, as receptionist Karlene Scott has retired after 42 years at the school. Ms. Scott was, for many, both the face and voice of the school for much of that time, fielding questions and supplying solutions to challenges faced by administration, staff, and most importantly, generations of students.

Former MSS principal Gary Chandler recalled the day he hired Ms. Scott. “My wife and I were shopping for groceries at Wagg’s and she asked about the job we had at the school,” he recalled. “I asked her ‘can you type?’ In those days it was really hard to find people.”

As it turned out the chance meeting was to prove to be an inspired connection. “She has been a gem,” said Mr. Chandler. “She has the most pleasant way about her, just a super person. She was without a doubt been one of my best hires.”

Ms. Scott began her career in the guidance department, settling into her role before being moved to the main office and reception. In all capacities, Ms. Scott more than exceeded all expectations of both the staff and administration.

Former MSS principal and teacher Roy Eaton heartily concurred with Mr. Chandler’s assessment of Ms. Scott. “She was an incredible asset to the school and to myself,” he said, adding that in many ways, Ms. Scott was the very embodiment of everything that is good about MSS.

Former MSS principal and teacher Carolyn Lane Rock was also effusive in her praise of Ms. Scott. “Karlene knew everyone and everything at MSS, but also in the community,” she said. “If you needed to get in contact with someone or needed to get something done, she knew exactly who and where to contact them to get the job done.”

Former teacher Dawn Orr knew Ms. Scott since 1977 until Ms. Orr retired 20 years ago. “She was awesome,” recalled Ms. Orr. “Karlene was always up, always positive, extremely friendly, the kids could always relate to her. She did an excellent job. She has always been very active and talented.” Ms. Orr noted that in addition to her excellent people skills, Ms. Scott also is something of an accomplished singer.

Ms. Scott was in the office for the entire time that Lindsay Orr was a student at MSS. “Every student knew if they needed anything they could rely on Mrs. Scott,” said Lindsay. “She knew absolutely everything and was always happy to help.”

“Karleen was always at the school by 7 am,” recalled newly-retired teacher Lisa Corbiere-Addison. “You could set your watch to her coming.  She always had the on-call material laid out.” Ms. Corbiere-Addison noted that Ms. Scott was the very epitome of the multi-tasker. “She would hop into her work, from letters to phone calls, to preparing awards night pamphlets and then, a few weeks later she could be seen in the community helping out with Mindemoya ball tournament or the Providence Bay Fair. She was always caring and giving to her community.”

“Most of what I do is connected with my job,” laughed Ms. Scott when approached about her impending retirement during a ball tournament in Mindemoya this past summer. But Ms. Scott has continued her community work, even after retiring from her job at MSS—most recently organizing the popular annual Providence Bay Fair Ambassador competition.

A reception in honour of Ms. Scott was held 7 pm at Manitoulin Secondary School on July 13. 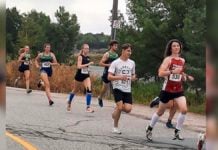 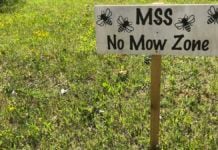 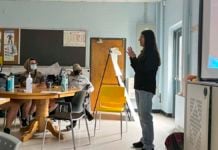