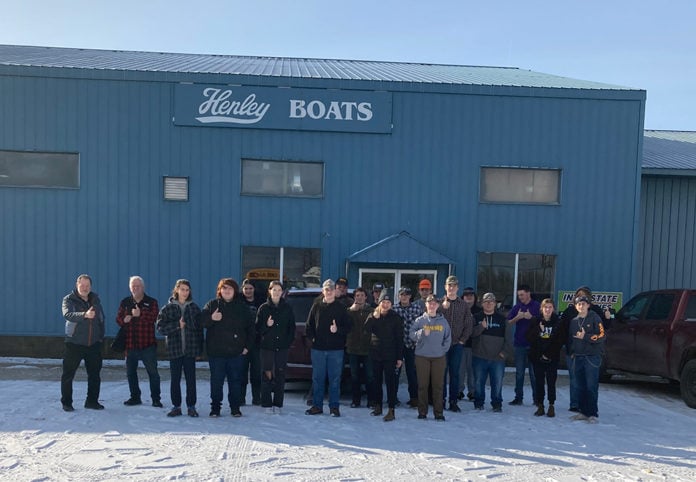 M’CHIGEENG—A large group of Manitoulin Secondary School (MSS) students had the opportunity to look at the possibilities of getting into a trades career, after attending a recent trades expo in Sudbury and taking a tour of two Manitoulin Island-based businesses.

At the ‘Level Up’ expo, students learned how they can unlock their futures in the skilled trades and were informed that Ontario has 144 skilled trades in the apprenticeship program. The gathering was held to allow students to meet people in exciting industries, see hands-on demonstrations, and explore a variety of trades. The students had the opportunity to find out how they can work toward well-paying jobs, gain in-demand skills, and find enjoyable and consistent work in trades.

“Students met with various college representatives and industry representatives to discuss careers in the trades as a post-secondary option and were able to test out state-of-the art welding simulators and heavy equipment operator simulators,” said Mr. Robinson.

Mr. Robinson explained that students watched flat sheet metal being transformed into beaded sheet metal siding and roofing and flat metal strips being folded into ridge caps at Terra Star. He pointed out, “a former (MSS) Mustang grad was operating the machines.”

“Henley Boats provided a tour of their facility, showcasing the process involved, starting with flat aluminum sheeting formed and fabricated into many different marine applications from family fishing boats, construction company boats with landing ramps, commercial fishing boats to police boats, to a 12-passenger firefighting boat which is headed to the west coast on its completion,” continued Mr. Robinson.

David Ham, one of the owners of Henley Boats, “highlighted many of the job opportunities in this family-owned business with a possible 16 different career paths from design to fabrication to engine mechanics, electronic technicians to welders to accountants to sales and more,” added Mr. Robinson.