MANITOULIN – Manitoulin Island District court has a new presiding justice of the peace (JP) at the helm.

“I’m definitely looking forward to this,” Lori-Ann Toulouse told The Expositor last week. “I am originally from Wiikwemkoong Unceded Territory, so it will be good to be back home.”

Ms. Toulouse explained, “I was originally appoint-ed in 1994 as a part-time non-presiding justice of the peace in Wiikwemkoong.” She was reappointed in 2002 to a full-time JP presiding in Sudbury base court.

“Prior to originally being appointed in Wiikwemkoong court, I applied for, and went through the native justice of the peace education program,” Ms. Toulouse told The Expositor. “This was an extensive four- week training program held in Sudbury.”

“On completion of the native JP education pro-gram, I was recommended for appointment as a justice of the peace,” continued Ms. Toulouse, (who also has a Correctional Worker Program certificate). “This led me to where I am today, from non-presiding to a full-time presiding justice of the peace.”

“Over the years I’ve been at courts all over the northeast region, in Attawapiskat, Sundridge, Sault Ste. Marie (and areas in between) having sat in different courts for provincial offence and bail courts,” said Ms. Toulouse.

Ms. Toulouse was transferred to Gore Bay District base court on a full-time presiding basis as of January 1. She will preside in Gore Bay and Wiikwemkoong. 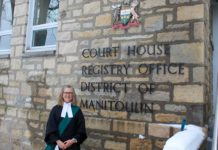