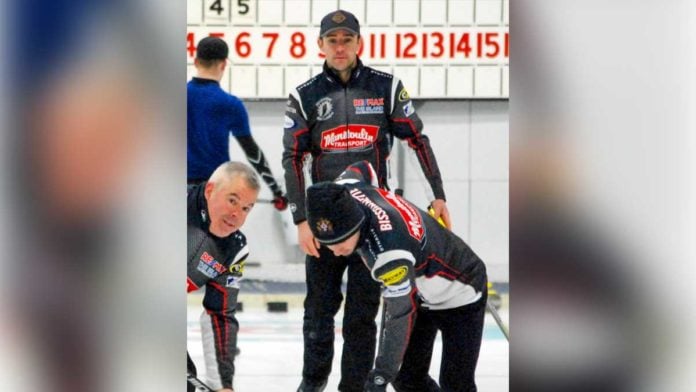 MANITOULIN—Well-known Manitoulin Island curler Jordan Chandler will be a member of the Brad Jacobs rink at the 2022 men’s provincial curling championships being held in Sault Ste. Marie this week.

“When the skip for the number one ranked team in the world asks if you want to play with them at the provincials, you say ‘yes’,” stated Mr. Chandler, who has known Mr. Jacobs for over 20 years. He pointed out the Brad Jacobs rink had been ranked number one in the world at the time of the Olympic trials held last fall.

“Brad (Jacobs) is without one player on his team for the provincials, so he called me and asked if I would like to play for his rink. I said sure,” Mr. Chandler told The Expositor. Mark Kennedy, a regular member on the Jacobs rink, had agreed to play on the Mark Gushue Canada’s men’s curling team at the Winter Olympic Games in China this month. “Mark is a good player to take to the Olympics because he can play any position on the team,” said Mr. Chandler, noting that with the current pandemic situation, this can be a factor.

Even though Mr. Chandler acknowledged, “I haven’t curled competitively for the past two years, Brad called at the beginning of January, and I’ve been practicing ever since. The Providence Bay Curling Club is close to my home, and they have been great to help out by allowing me to practice there. The Providence Bay club has been great to work with by making the ice available, and Harold Dewar, my junior curling coach, has been helping me practice.”

At the provincial men’s championships taking place February 10-13 Mr. Chandler will be playing second on the Jacobs rink which also includes lead Ryan Harnden, vice E.J. Harnden and alternate Caleb Flaxey. “Yes, I’m going to have to learn to sweep, I haven’t done much of that for a long time,” quipped Mr. Chandler.

There will be a total of six rinks taking part. “One team will advance to the Brier (national Canada men’s championship), to represent Northern Ontario,” said Mr. Chandler. “Interestingly, for the provincials (Canada-wide) they have opened up three wild card teams to qualify for the Brier.”

“If our rink qualifies for the Brier, I would be the fifth on the team,” pointed out Mr. Chandler.

The provincial championships, “should be a good experience,” stated Mr. Chandler. “My own rink had  qualified for the provincials for the last 10 years they had been played, and we lost in the finals one year. The problem has been we keep losing to these guys (the Brad Jacobs rink).”

“Hopefully, our rink will have success at the provincials and be able to go on to the Brier,” added Mr. Chandler.

Brad Jacobs led Canada to a gold medal at the 2014 Winter Olympics. Mr. Jacobs is also the 2013 Tim Horton’s Brier championship skip and the 2013 World Championship runner-up. He is an eight time (as of 2017) Northern Ontario provincial champion, and one-time provincial junior champion. The Jacobs rink won the 2018 Tour Challenge Grand Slam event. A month later, the team won the 2018 Canada Cup, their first Canada Cup title, defeating Kevin Koe’s rink in the final. The team once again represented Northern Ontario at the 2019 Tim Hortons Brier. The team went 9-2 in the round robin and championship round combined. The Jacobs team lost the one-versus-two match to Kevin Koe and the semifinal to Brendan Bottcher, resulting in the team getting the bronze medal.

The following season, the team officially added Mr. Kennedy to the line-up at third with one of the Jacobs team leaving to play with John Epping. They would win the 2020 Northern Ontario Men’s Provincial Curling Championship for the sixth year in a row. At the 2020 Tim Horton’s Brier, they battled through two tiebreakers before losing to Newfoundland and Labrador’s Brad Gushue in the three-versus-four game, all within the same day. Due to the COVID-19 pandemic in Ontario, the 2021 provincial championship was cancelled. As the reigning provincial champions, Team Jacobs was chosen to represent Northern Ontario at the 2021 Tim Hortons Brier. At the Brier, Mr. Jacobs led his team to a 7-5 sixth place finish.