﻿MINDEMOYA—It used to be a farm in the Hodgson family, before Jack Seabrook turned it into a golf course. The golf course was later purchased and taken over by the senior Seabrook’s son, John. Manitoulin Island’s oldest golf course, Brookwood Brae, and the adjoining Pirates Cove Cottages have now been sold but will remain in the family.

Logan Middleton began talks to purchase the businesses from his uncle and aunt, John and Cheryl Seabrook, in January and the deal closed May 1. Mr. Middleton is the son of the late Brad Middleton and Deborah Seabrook. “Nothing needs to change much,” he told The Expositor. “We’re keeping it in the family.”

Mr. Middleton, who was raised in Sudbury, is now a financial analyst living in Toronto. He’s also a golfer and takes his two boys to the driving range every Sunday these days. “My wife, Emily Thiang and I used to golf every weekend before our sons were born,” he said.

The business purchase was “kind of spontaneous,” Mr. Middleton explained. “Cheryl emailed me in the winter and asked if I would change my week staying at Pirate’s Cove. She said the deal they had expected fell through. John had previously told me the golf course and cottages were up for sale.” He talked it over with his wife and she agreed with the purchase, as the Middleton family stays there every summer and there is a family connection.

Jack and Marian Seabrook built Brookwood Brae in 1964. “Dad sold Massey Harris tractors and was a machinist,” recalls John. “He would get trade-ins for his work all the time, like sheep, and he would keep the animals on the farm until the fall.”

The farm had belonged to Ben Becks, Mr. Seabrook added. “He was married to my aunt Priscilla, my grandfather Joe Hodgson’s sister. Eventually, my grandfather inherited the farm and my dad bought Pirate’s Cove Cottages, which were built in the 1950s.”

“The joke was always that Brookwood Brae was built as a golf course because my dad didn’t think there would be much work to it,” Mr. Seabrook said. “My dad had a bad back and no one knew anything about golf.”

The original clubhouse was made from a box off a dump truck with a wood structure built on that. There were about six golf carts. “The fridge was in the middle of the clubhouse and for 25 cents, you could buy a chocolate bar and a pop,” said Mr. Seabrook. That clubhouse was located in the middle of the existing parking lot. “Then dad built the old clubhouse, and I built the first part of the new clubhouse in 1983,” he said. There have been a couple of additions since then. In 1992, he tore down the old building and rebuilt it, and purchased Pirates Cove Cottages.

In 1993, Mr. Seabrook moved the barn behind the first green and built both bridges. All of the greens on the current course were originally in different locations and the golf course only had eight holes initially

“There are a zillion stories about the course,” said Mr. Seabrook. “A guy did an article on me in a golf magazine years ago. I was a 21-year-old kid who owned a golf course. And I didn’t know a thing about it. But all kinds of people pitched in and helped out.”

In those early days, green fees were two dollars. “We couldn’t go to three bucks or we would have no one to play,” he noted. “Dad had maybe 50 members when he opened the course. I remember the first year, membership fees were $50 for the year. I had people from Mindemoya pay for a membership every year, who never played golf. This business has been super well supported by members of the community: people like Pick Wass, who owned Wagg’s store, and Martin Taylor paid for years and never played the course.”

Pirate’s Cove Cottages ownership came to John Seabrook’s great uncle and aunt, Alma and the late Allan Tustian, and eventually John Seabrook purchased it from them, restoring the entire original farm back to single ownership.

Mr. Middleton doesn’t have any current plans to move to the Island or to make any changes with what the Seabrooks have been doing with the course, or current employees. “My plan is to do nothing and change nothing,” he quipped. “If it makes money, I’ll keep investing in the course and the cottages to make them better every year.”

There is a general manager in place. “Charlie Hopton basically uprooted his family in Sudbury to move to Manitoulin Island. He will be the general manager and his wife Kristina has experience working at restaurants in Sudbury, so she will work in the clubhouse. Laurie Beaudin basically handles men’s and ladies’ nights and the weekends. She basically handles all the important stuff when Steve (Shaffer) is not there.”

“John has kept the course in great shape for so long,” Mr. Middleton said. “We have Blair Kalmikov, who will take over from John whenever he wants to retire. Something tells me he will stay on a lot longer than the one year he has been talking about, and I hope that is the case. He has done a fantastic job with the course.”

Mr. Seabrook said he will continue running the business like it is his own for a year, and wife Cheryl is helping out too in the clubhouse.

“Logan told me that I still get to do any improvements that I want. But we are looking for people to help with the grounds,” said Mr. Seabrook. “We have a good core staff, just not enough to do all the work involved.”

Because they’re short staffed they, “can’t do the fun stuff,” said Mr. Seabrook. Once school gets out, there will be two summer students working there.

The golf course is very busy. “COVID-19 was the best thing to hit golf,” said Mr. Seabrook. There were 102 golfers out on Wednesday night men’s night, last week and 45 ladies out for ladies’ night.

“Logan had called me and said I think I can buy the business,” said Mr. Seabrook. “I was talking to someone else at the time but I sold it to Logan and I can’t imagine a better deal. It would only be better if (Logan) bought it to work here. So far, he’s bought it to have someone else run it. No, I’m not going to quit. I won’t work every day, but I love doing projects. I’ve quit cutting the grass. But I’ll be there, as long as I can do it.”

“Logan has always wanted a piece of Manitoulin Island,” Mr. Seabrook added. “He’s got a good piece of it now.” 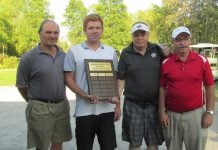