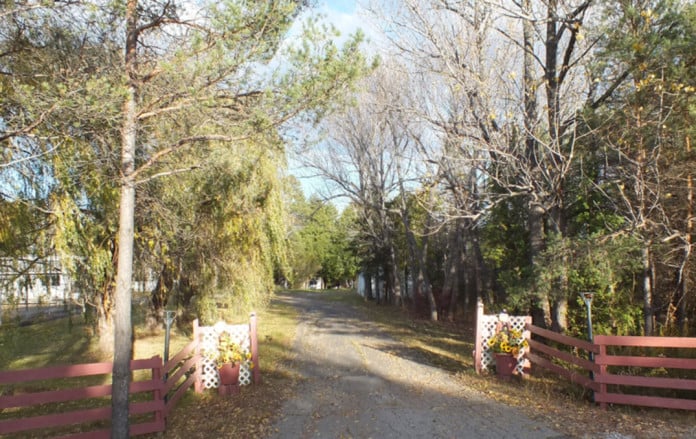 MANITOWANING—Rodney Deforge is one busy fellow these days. The social entrepreneur and lead pastor of Cornerstone Christian Assembly has just closed a deal on the former Manitowaning Lodge and work is underway to make the property the new home of Barney’s Bargain Barn, the for-profit business that acts as a revenue stream for the church, along with a number of other interesting enterprises.

The tennis courts of Manitowaning Lodge are the most visible aspect of the property, with their immaculate courts running alongside Manitowaning’s Cardwell Street corridor on the way to Wikwemikong, Rainbow Ridge Golf Course or the Assiginack Curling Club, the former summer home of Barney’s Bargain Barn. “The courts have been really well maintained,” said Pastor Deforge (whose nickname Barney is the ‘Barney’ in the business name). “We have been in contact with the local tennis group and they will be able to use the courts and we have contacted Assiginack Public School in case they would like to use them for a program at their school.”

The plan for the property is two-fold, explained Pastor Deforge. “The immediate plan is to relocate Barney’s Bargain Barn there,” he said. “We had looked around for commercial land in the area and there just wasn’t any to be found.” The Manitowaning Lodge property is already zoned as commercial property, making it ideal for the organization’s plans.

Although there are buildings on the property, they have been out of use for some time, he explained, requiring a good deal of work to prepare the property for its new role.

“There is a small building there that we are going to add onto,” said Pastor Deforge. “The contractor is already in there.”

Barney’s Bargain Barn has already proven to be a successful operation, generating up to $900 a weekend, not only through the summer months but even up to the present. “There are a lot of locals who come out,” he said, “so it is still very busy.”

In the future, Mr. Deforge hopes that the concept will expand to include small boutique businesses. “But that is probably a little bit down the road,” he said.

Barney’s Bargain Barn had incorporated a small café offering inexpensive meals as an experiment and it proved so successful that they plan to continue the practice in the new location. “You could get a soup, sandwich and a pop for around $5, so it was a very affordable meal,” he said. “A lot of seniors began coming out and it became a kind of meeting place for people.” That sense of community added a lot to the atmosphere they found. “So we want to keep that going.”

The funds generated from the social enterprise had another bonus. “We found that we were able to waive the delivery fees for the food supplies that we bring to food banks,” he said. “We were able to fund our operations out of the revenues generated by the business.”

The church group has four properties from which they currently operate their various ministries, but the eventual plan is to consolidate operations at the Manitowaning Lodge property and sell off the other properties.

“We are going to build a new church,” said Pastor Deforge. “It is a little bit of a leap of faith, but we hope that this will result in cost savings.”

There are also plans to re-open the restaurant located on the property and the small motel that is currently there has been in operation and has been well maintained.

The endeavours currently employ up to 16 people, some of them volunteers and a number of paid positions. “We hope that will grow,” he said. “Providing jobs locally is very important to me.”

There are already two new jobs coming into play. “We have hired two youth ministers who will be running programs,” he said. “They are currently making the move and will start work in January.”

Barney’s Bargain Barn also has a popular Facebook page that generates about 1,600 visitors a week, noted Mr. Deforge, who said they have found it to be a valuable addition to their newspaper advertisements. “We put up a photo of the items that we have come in and people can look at them to see what they are interested in,” he said.