MANITOWANING—During last week’s meeting of Assiginack council, Councillor Les Fields shared with her fellow members of council the news of the possibile the closure of the Manitowaning detachment of the Ontario Provincial Police (OPP).

Councillor Fields had had the chance to bring forward the rumour at the most recent meeting of the Community Policing Advisory Committee (CPAC) and to Manitoulin detachment commander Staff Sergeant Kevin Webb.

“Staff Sergeant Webb made it clear that he should be invited to a council meeting to discuss it further,” Councillor Fields explained during the February 19 meeting of Assiginack council.

The councillor shared that she felt council should learn the business plan for each of the detachments across Manitoulin and what cost saving measures a closure would actually incur for the OPP.

“I would like to know what exactly it costs to keep this office open,” she said.

Councillor Fields talked about the asset the detachment is to the community, not only in terms of public safety but also that the officers it employs become members of the community, as do their children, attending Assiginack Public School.

As for the openness of the business case, “if the Ontario government demands municipalities are transparent, the OPP should be too,” she added. “There needs to be some very significant rationale as to why this office should be closed.”

“We need to make our case clear as to why this office is so important to this community,” Councillor Fields reiterated.

“The investigation on the possible closure of current detachments and the opening of new detachments in the future is in the very preliminary stage,” said Staff Sergeant Webb said during the CPAC meeting. “As we all know, the province is looking at efficiencies and there aren’t the dollars there were in the province have had in the past.”

“The (OPP) organization have identified in our OPP region some detachments that may be amalgamated,” said Sgt. Webb. “This is all based on numbers, calls of service numbers which are dwindling, and how many people work in each detachment throughout the province. The vision for Manitoulin Island in the future is to have two detachments, or possibly just one and to situate the detachment offices where they will service the Island best.”

“It’s inevitable—eventually we will have two or one detachments, not with the present facilities,” Sgt. Webb had told the CPAC meeting. “The OPP has identified seven detachments in the region requiring the development of a business case and how to move forward. I met with the reeve and clerk of Assiginack and I said we have to start looking at options. I told them, number one, the Manitowaning detachment is one of the detachment offices that is being looked at for closure; and number two, we need to look at what the OPP can do to lessen the impacts on the affected communities such as possibly having a storefront office set up with a computer and a cruiser in the community. This would help deal with quick responses to an incident and would provide visibility in the community.”

“To say that the Manitowaning or any detachment is going to close in the near future may be premature,” the staff sergeant added. “We will start to look at all of this, and to get input from the community on how it will affect them.”

The Expositor spoke with Staff Sergeant Webb who explained that he will be putting together an inter-organizational business case that then goes “up the chain of command.”

“The first thing you have to do is go out and talk to the people it’s going to affect, including the employees,” he said.

The staff sergeant explained that in terms of cost saving measures, stopping crime leads to an increase in savings and that the Manitoulin OPP would continue to take a proactive approach to crime. “Our goal is to reduce offences,” Staff Sergeant Webb added. “Mischief, thefts, etc. The more you see an officer the less likely an individual would be to reach into a car and steal something,” he said as an example. “We had 25 mischief charges last year and five this year in the same quarter and I’d like to think that’s indicative of the continued good work of our officers.”

Staff Sergeant Webb is slated to attend the next meeting of Assiginack council on Tuesday, March 5 at the council chambers in Manitowaning at 7 pm. 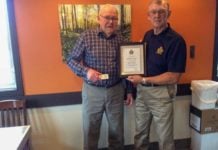