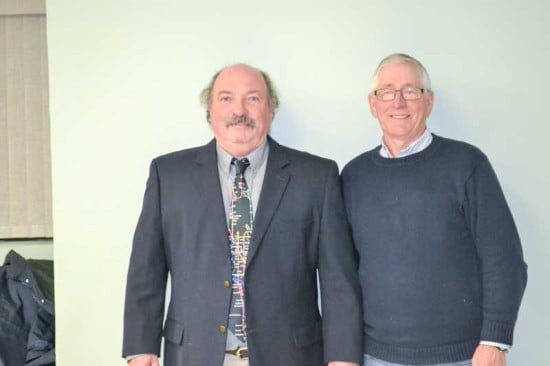 Council began the process by carrying a motion to declare the seat vacant after reviewing a letter from former Northeast Town Mayor Joe Chapman stating his resignation from the position dated December 31, 2012.

Town clerk Pam Cress explained to council the various options available regarding the election of a new mayor including appointing a councillor or community member to fill the vacant seat, or calling a by-election.

“If a vacancy occurs in the office of a member of council, the municipality shall, subject to this section, fill the vacancy by appointing a person who has consented to accept the office if appointed or required a by-election to be held fill the vacancy in accordance with the Municipal Elections Act, 1996,” read Ms. Cress.

Councillor Paul Skippen was the first to put a motion on the table, appointing deputy mayor MacNevin as the new mayor. Councillor Michael Erskine seconded the motion stating, “Al has done a marvelous job as deputy mayor, filling in whenever needed.”

“And I’m not interested in the costs associated with calling a by-election,” added Councillor Erskine.

The next step in the process was to declare Mayor MacNevin’s ward two council seat vacant. A motion was put on the table and carried to this effect.

During the discussions as to who should fill Mayor MacNevin’s council seat, Councillor Erskine suggested Melissa Peters, a past councillor and a regular attendee of council meetings.

“During the last election Ms. Peters was the next person in line for a council seat,” said Councillor Erskine. “She is also very active in the community and in attending council meetings. She has only missed a few meetings and would be well informed on the current issues. It just has a symmetry to it, as there were not that many votes between myself and her.”

Councillor Bill Koehler seconded the motion, asking Ms. Peters if she would accept the position if council voted in favour of appointing her to the table.

Ms. Peters stated she would and council voted, appointing Ms. Peters to the position of ward two councillor, filling the vacant seat.

“Congratulations,” Mayor MacNevin said to Ms. Peters as she joined the council table.

Mayor MacNevin, Councillor Peters and deputy mayor Gauthier will carry out the term in their new roles until the next municipal election in 2014.

Former Mayor Joe Chapman explained in a press release that he resigned from his position due to “ever increasing professional and personal commitments, limiting his ability to continue to meet the demands of the mayor’s office at the level that the town and his constituents deserve,” said the release.

Mr. Chapman has served as mayor of the Northeast Town since 2010, in addition to service three terms on council.

The Expositor sat down with Mayor MacNevin last week following his appointment to discuss his new role and his plans moving forward.

“I am pleased,” said Mayor MacNevin of his recent appointment. “I feel good about it. I have been deputy mayor this term and I have filled in on several occasions for the former mayor as he has been busy with other obligations, so I feel comfortable in this position.”

When asked what issues he sees as priories for council, Mayor MacNevin responded that the decreasing water levels were going to be of great focus for council moving forward.

“The state of water levels is really something that myself and all of council is concerned with,” said the mayor. “We can’t bring the water back, but focusing on energy and finding a solution to mitigate the problem is a definite priority.”

“For me, another focus is the Centennial Manor,” concluded the mayor. “I have been a member of the board of management and will continue to be moving forward because the development of senior housing and assisted living for our aging population is another priority.”

Lastly, Mayor MacNevin said that council will be revisiting the town’s strategic plan in the near future, ensuring that council is following its recommendation and moving forward with its goals and objectives.

“It was actually a suggestion made by Councillor Gauthier recently and I agree that it would be a good idea to revisit it,” concluded the Mayor.