AURORA—Manitoulin’s Michael Laidley and his team the Aurora Tigers did not move onto the Ontario Junior Hockey League (OJHL) Dudley-Hewitt Cup last week in Wellington after losing to the Toronto Patriots in the Buckland Cup last month. The Patriots went on to win the cup and be named the new Central Canada Jr. A champions, advancing to the Royal Bank Cup in Vernon later this week.

Though Michael was cheering on his team from the stands during the series after sustaining an injury earlier in the playoffs against the Kingston Voyageurs, the loss was still a blow as the Little Current hockey star was hopeful that his fractured middle finger would heal by this week in time for him to play in the finals.

Eighteen-year-old Michael will continue with the Tigers next fall before moving on to play for St. Lawrence University in Canton, NY in 2015 (with a full scholarship). 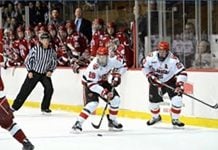 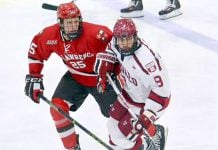