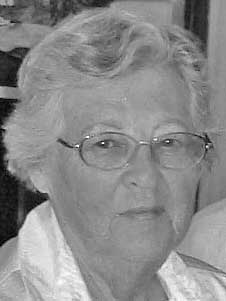 Mildred Major, of Gore Bay, passed away peacefully with family by her side on Wednesday, April 22, 2015 in her 87th year. Beloved mother of Kathy Shannon of St. Catharines, Leigh of Gore Bay and Greg of Houston, Texas. Cherished grandmother of Rachael (Jay) Daniels of Kingston, Meagan (Javier) Solano of Qatar, Alex Shannon of Toronto, Elise Shannon of St. Catharines, Stefanie (Tyler) Jahner of Chesapeake, Virginia, Ethan Major of Atlanta and step grandson Ernie Solis of Spain. Sadly missed by great grandchildren Sebastian and Ana Viktoria Solano, Hudson and Riley Daniels, Alivia and Gavin Jahner, brothers Leonard Purvis and Ken (Bev) Purvis, sister Helen (Doug) Gordon and many nieces, nephews and cousins. Predeceased by her husband Frank, parents Leonard and Mildred (Millie Kemp) Purvis, brother Charlie (Nellie) Purvis and sister-in-law Sally Purvis. Mildred was born and raised in Gore Bay. She graduated from business college in Toronto and worked as a legal secretary in Gore Bay until her marriage in 1950 to Frank Major. The family moved to Sudbury but spent all their summers at Burnt Island. Retirement brought Mildred and her husband Frank back to Gore Bay in 1975. She was an active member of the U.C.W. and a 24-year member of the Royal Canadian Legion. Mildred was an avid gardener, fabulous cook and enjoyed countless family gatherings over the years. She will be dearly missed by family and friends. At Mildred’s request, cremation has taken place. A memorial service will be held at a later date. Interment Gordon Cemetery. Memorial donations may be made to the Lyon’s Memorial United Church or Mindemoya Hospital Auxiliary as expressions of sympathy. Arrangements entrusted to the Culgin Funeral Home, Gore Bay. www.culginfuneralhome.ca.