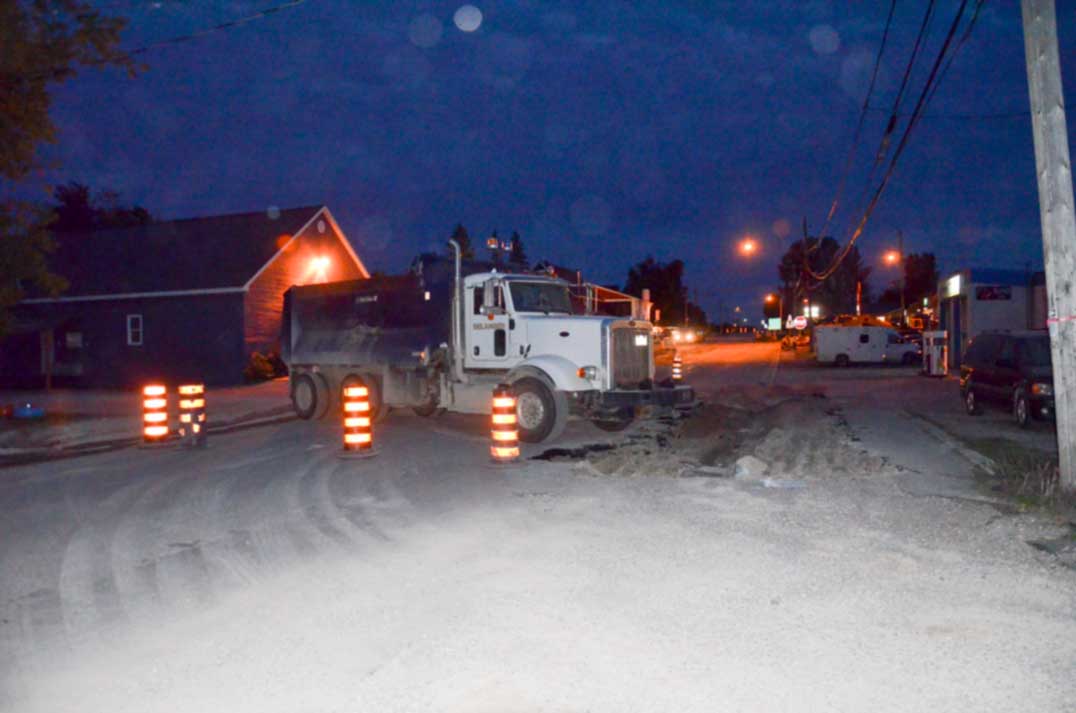 MINDEMOYA—Nightly road closures have been a minor inconvenience to Mindemoya residents over the past few evenings, but the closures are anticipated to have already ended by today (Wednesday, September 30)—although work on the roads will continue, likely picking up again in the spring.

The topic of the road closures was discussed during an update by CAO Ruth Frawley at the September 29 meeting of the Central Manitoulin council.

Ms. Frawley noted that the road closures were not originally anticipated, but that it was determined by the contractor that the closures would be necessary on September 23 through 25. “The protocols have been followed and notices were sent to the ambulance, OPP and fire departments.”

Since the meeting, however, “unforeseen issues” forced a continuation of the road closures, albeit at a different section of town. That work was to take place from Monday evening to Tuesday evening.

“The contractors have informed us that the closures will be from the intersection, near the Credit Union to up by Williamson’s Hardware,” said Ms. Frawley. “The closures are to be from 8 pm to 7 am.” Ms. Frawley said that she hoped that part of the project that required the road to be closed would be over by the time The Expositor hits the stands. “That is my understanding, yes,” she said.

The work was being completed during the night time hours to minimize the impact on local travel and so far there had been no indications of school buses being impacted. “They were a bit late this morning,” noted Ms. Frawley at the Thursday night council meeting, “but I don’t think any buses were caught.” She said that she had posted the closures on the municipality’s webpage and on Central Manitoulin and Mindemoya Facebook pages. “It was pretty amazing,” she noted. “By this evening 2,051 people had seen the notice of closure and were sharing it. That is with a population of 1,942.”

The traffic slowdowns on Highway 542 between M’Chigeeng and Mindemoya had more impact on residents than the nightly closures, “but they are finished with that project,” noted Ms. Frawley.

Although the curbing work in the downtown area has been underway, Ms. Frawley said that it was her anticipation that the construction company would be finishing up that work next spring. “I really anticipate them having to come back to finish things in the spring,” she said.

In order to facilitate the work being conducted in downtown Mindemoya, Central Manitoulin suspended its noise bylaw for the two nights the work was being done.

Since the road is under the control of the construction company, Ms. Frawley noted that the consultations conducted with the municipality were “a courtesy to let us know.”

“It is stressful,” noted Ms. Frawley. “I think people don’t realize that it is not a municipal project.”

“The contractors have been excellent in getting back to people,” noted Councillor Pat MacDonald.

“I think people are largely accepting of work that is being done,” said Ms. Frawley.

“I have been back and forth between Big Lake and Mindemoya in the past week a number of times and I don’t think I have been held up more than a minute,” volunteered Councillor Linda Farquhar.

“I think things are going well and it will be quite a positive project for the community,” agreed Mayor Stephens.