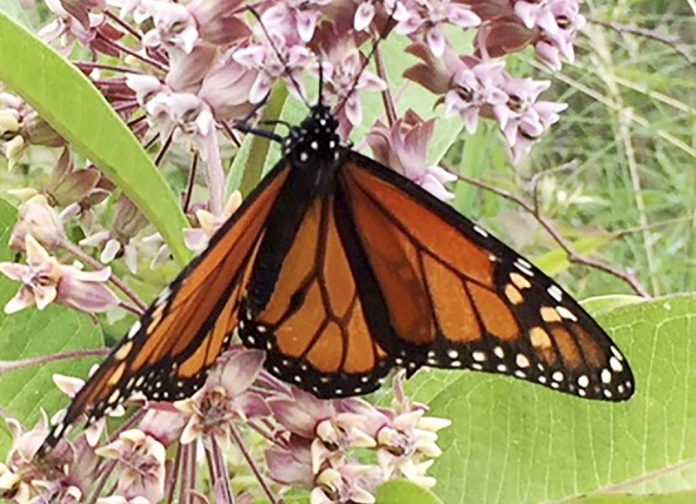 SHEGUIANDAH—The abundance of monarch butterflies in larger numbers on Manitoulin Island this year compared to the past 10 years prompted the organizers of the 2018 version of BugFest at Batman’s Cottages and Campground near Sheguiandah to concentrate on this iconic butterfly.

On the morning of Saturday, July 14, young campers at Batman’s were entertained with a presentation by retired Laurentian University entomologist Dr. Joe Shorthouse. The presentation included a description of the life cycle of monarchs, an overview of their migration between Mexico and Manitoulin Island, and the role monarchs play in the education of school children from Mexico to Ontario.

Dr. Shorthouse explained how the descendants of monarchs that left Mexico in March arrived on Manitoulin in May and June and immediately began laying eggs on the leaves of milkweed. Milkweed is poisonous to most insects and so monarchs have this common food source all to themselves.

Monarch caterpillars go through five instars or growth stages as they become full grown in two-three weeks. They pupate in a lime green chrysalis and then the adults emerge about a week later.

If eggs are laid early enough in the season on Manitoulin, two generations of monarchs may result. However, in most cases, there is one generation and once the adults appear, they feed on the nectar of flowers for the rest of the summer building up fat reserves for their long flight south.

The caterpillars of monarchs are brightly coloured with strips of black, yellow and white to advertise their presence and remind birds that they still contain poison in their bodies from the milkweed. The poison is also found in adult butterflies. Birds who attempt to eat them quickly become ill and learn to avoid them.

The reason for the sudden increase in numbers of monarchs on Manitoulin this year is unknown, but public attention to the decrease in numbers over the past 10 years and the continent-wide planting of milkweed seeds, particularly across central United States, may be a contributing factor.

After the presentation in the recreation hall at Batman’s, some participants walked to a patch of milkweed at the edge of the campground to examine caterpillars that campers had found a few days earlier. Dr. Shorthouse was able to catch with his fingers an adult monarch that was feeding on milkweed flowers and show it to the children.

By gently holding the wings closed above its back, Dr. Shorthouse placed the butterfly on the fingers of the young naturalists such that they could have a close look at the head and curled mouthparts. The butterfly few away unharmed when it was released.

Lisa Deschamps, co-owner of Batman’s along with her husband Andre, told the Expositor how excited she was that a patch of milkweed is thriving at their campground and that monarchs have found the plants, deposited their eggs and caterpillars are present for the children to observe.

Like the campers at Batman’s, she expressed amazement that not only had adult monarchs flown across Lake Huron this spring to Manitoulin Island , but that some had located Batman’s milkweed. As a result, new butterflies are being produced from these plants and are now feeding on flowers of the campground.

Monarchs that arrived on Manitoulin this spring are not the ones that overwintered in Mexico, but rather they are the grandchildren, and possibly great grandchildren, of the ones produced last year.

When the butterflies overwintering in Mexico start flying north, they fly as far north as they can before their fat reserves are exhausted, lay eggs and then die. This usually occurs at the latitude of Texas and when these eggs hatch, turn into caterpillars, pupate and the adults appear, they too fly north until they are exhausted and lay eggs. It is these third generation adults that make it as far north as Manitoulin Island while a few other adults even make it a couple hundred km further north and lay eggs if they can find milkweed.

The offspring from northern produced monarchs are the ones that fly 4,500 km in the fall to one mountain range in central Mexico. This makes the monarchs produced on Manitoulin Island among those that must fly the furthest of all current-year butterflies as they assemble in centuries old Mexican sites to avoid our cold winter temperatures that would kill them.

As part of their flight path of monarchs both to and from Manitoulin, and elsewhere in Ontario, these butterflies about the weight of a paper clip, successfully fly across one of the Great Lakes. This spring Shorthouse and his wife reported seeing monarchs at Providence Bay that had just flown across Lake Huron from Michigan.

Monarchs are commonly seen by boaters in the middle of these lakes and there are reports of butterflies landing on boats for a rest, especially towards the evening as monarchs do not fly at night. Coincidentally, Batman’s resident Alex Miglioranza and his guests reporting seeing six adult monarchs while they boating from Baie Fine to Manitoulin the day after the BugFest.

Monarch butterflies produced at Batman’s and other parts of the Manitoulin will be tagged this year and imagine how exciting it will be when the first individual from our Island is found hanging on an oyamel fir tree in central Mexico this coming winter.