ONTARIO—For the most part, politicians, social service agencies, food banks and others are panning the Ontario government plans to reform social assistance, which the latter says will help more people break the cycle of poverty, re-enter the workforce and get back on track.

“This government is breaking their promises of keeping the basic income pilot in place and they have reduced the planned increase to the social assistance programs,” said Algoma-Manitoulin MPP Michael Mantha. “They had said all parties agreed to maintain this; so this is a broken promise the PC party made during the campaign. This is a case of the government turning its back on people who are struggling on Ontario Works and disability and need help and support. People who are doing their best to make ends meet.”

“We need to do more than just help people remain mired in poverty,” said Lisa MacLeod, minister of Children, Community and Social Services, in announcing the reform plan. “We’re going to hit the pause button on the previous government’s patchwork system and replace it with a system that helps stabilize people in need and support them to succeed.”

Minister MacLeod highlighted that the government has set an accelerated 100-day deadline to develop and announce a sustainable social assistance program that focuses on helping people lift themselves out of poverty. In the intermediate term, the government will provide Ontario Works and Ontario Disability Support Program recipients with an across-the-board 1.5 percent increase in support rates to help them with a higher cost of living (this amount is down from the former government’s scheduled increase of three percent which was set for October). As part of this reform, Minister MacLeod also announced that the province will be winding down Ontario’s Basic Income research project in order to focus resources on more proven approaches.

“The 1.5 percent increase will not keep up with inflation, or provide for proper living standards,” said Mr. Mantha.  “And it will make it more difficult for people to make ends meet. The Conservatives are turning their backs on the people that need help the most.”

Mr. Mantha said that it will put more pressure on food banks as well. “Absolutely it will have an effect, food bank clientele numbers will increase. We are seeing more people, more seniors using food banks as well as others. They have no choice.  In areas  like the North it is only because of the generosity of people helping food banks that some of these individuals and families get by. But it is, and is going to get harder and harder to meet the demands.”

Fern Dominelli, CAO of the Manitoulin-Sudbury District Services Board (DSB), said that the local DSB and other Northern Ontario DSBs continue to formally request that the province grant service system management of all employment services to them so they can expand on employment initiatives that have proven effective in the North.

With additional resources they can continue work with key success factors that help to reduce people’s reliance on financial assistance through retraining and re-entry into the workforce. “At this point we don’t know what the  government is going to do or put in place,” said Mr. Dominelli. “They have changed a bunch of things already. The previous government made strides in helping to make people financially independent. Now with this government, the focus is on finding jobs for these same people on support as the best solution and I agree to a point.”

“We as DSBs need full integration on all employment services, so we can increase employment initiatives that have proven to be successful,” said Mr. Dominelli. “We’ve been asking the government for this since 2013.”

Official Opposition Leader Andrea Horwath said  “Doug Ford’s decision to slash the meager increases to social assistance is appalling, it drags Ontario backwards, and it pushes those already at a disadvantage even deeper into poverty. Mr. Ford’s attack on low-income people is disgusting and cancelling the unfinished and promising basic income pilot project is a waste and a shame.”

“Instead of dragging Ontario backwards, I want to move us forward,” said Ms. Horwath. “Let’s address Ontario’s homelessness and poverty problems, not let Mr. Ford make them worse. Let’s tackle homelessness in our cities, not allow Mr. Ford to force people onto the streets and into emergency rooms through his callous acts.”

Ontario Public Service Employees Union president Warren (Smokey) Thomas said, “the government’s latest assault on the so-called ‘little guy’ won’t fool anybody, least of all the families who rely on Ontario Works and ODSP to get by. They say they’re ‘compassionately’  increasing rates by 1.5 percent. In fact, the rate was supposed to go up three percent. This government is cutting it in half. That’s a strange way to show compassion to the vulnerable.”

Mr. Thomas also questioned the 100-day timeline to review Ontario’s extensive social assistance system, but said if the government was looking for a quick win, it should reverse the Harris Tories download of social assistance and housing to municipalities.

“Municipalities, particularly the smaller, rural and Northern municipalities, have been crushed by Mike Harris’s disastrous download of social costs. The single best thing Doug Ford could to do improve the province’s social assistance program would be to return those costs to the province,” said Mr. Thomas.

“Mr. Ford and his government should be consulting front-line workers through their bargaining agent  about any changes to the social assistance system rather than reeling off daily edicts. That’s where the expertise is,” Mr. Thomas said.

The Ontario Association of Food Banks (OAFB) said in a release, “the government of Ontario has announced its plans to terminate the Basic Income Pilot, as well as reduce the planned increase to Ontario’s social assistance programs by 50 percent. The OAFB is disappointed and alarmed by these unexpected changes and is concerned about the impact that it will have on low-income Ontarians.”

“Food banks across the province have long advocated for increases to Ontario’s social assistance programs and the continuation of the Basic Income Pilot as an evidence-based solution to poverty in our province. The enactment of these cuts would be a step backwards in our collective effort to create a healthier and hunger-free Ontario.”

“Our plan will help get people back to work and keep them working, while supporting people with disabilities to work when they are able and participate in their communities,” said Ms. MacLeod. 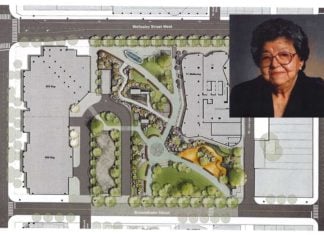