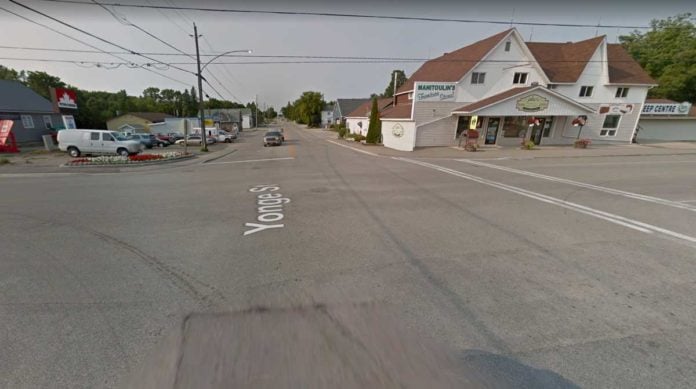 MINDEMOYA—While the Ontario Provincial Police (OPP) is continuing its investigation into a serious two vehicle motor vehicle accident at the downtown intersection in Mindemoya in July, the Ministry of Transportation (MTO) is going to be carrying out a traffic study of that location this week.

“I called them today and the MTO has indicated that they are going to be carrying out a traffic study on August 13,” said Algoma-Manitoulin MPP Michael Mantha, last Thursday. “And we still want to have a meeting, but they (MTO) would rather have the study done before we sit down with the MTO, OPP and the municipality to look at what solutions can be looked at for this intersection. And, we have indicated that not only a traffic volume study needs to be looked at, but this also needs to include looking at the speed that vehicles are travelling at going into Mindemoya.”

Jaclyn Lytle, communications coordinator, Northeast operations with the MTO told The Expositor in an email August 6, “the ministry is in the final stages of scheduling an operational performance review of the Highway 542 and Highway 551 intersection in Mindemoya. The scope of work includes a complete operational review of the intersection, as well as a speed study on Highway 542 north of the intersection. The goal of this review is to assess the performance of this intersection during the peak season and to continue investigating options to enhance safety at this intersection. Work is tentatively scheduled to begin August 13.”

“I’m glad the MTO is going to do their study at this time of the year and not in September when traffic volumes decrease,” said MPP Mantha.

As for details on the  July 19 accident, OPP Provincial Constable Robert Lewis told The Expositor on Wednesday of last week that details “are still under investigation by our traffic incident management enforcement unit. The complete investigation on what happened, and identification of who was in the accident  will not be officially released until the investigation is complete.”

As had been previously reported, on July 19, shortly after 6:30 pm, members of the Manitoulin detachment of the OPP and the OPP’s Technical Collision Investigation and Reconstruction Unit responded to the two-vehicle motor vehicle collision at the intersection of Highway 551 and Highway 542 in the town of Mindemoya.

The rear passenger of the car, 51-year-old Larissa Moffatt (from Whitefish Falls) was transported to Health Sciences North in Sudbury having sustaining life-altering injuries, the OPP reported. Ms. Moffatt was the only passenger in the vehicle that was seriously hurt. No one in the pickup truck was injured, the OPP told The Expositor.

Ms. Moffatt is the well-known proprietor of the Red Dog Grill in Whitefish Falls.

Phil Eadie, ex-husband of Ms. Moffatt and co-owner of the Red Dog Grill provided some good news about Ms. Moffatt when contacted by The Expositor last week. “Because of COVID-19 I haven’t been able to go in and visit Larissa in hospital. But her mom, my daughter and her sister have been able to. I spoke to her mother last night and she told me Larissa is making excellent progress. She is out of the coma and has begun rehabilitation. It will be a long road for her in recovering but this is fantastic news.”

Mr. Eadie told The Expositor that the Espanola Golf Course is holding a benefit tournament this week for Ms. Moffatt. He said, “we are donating all the food from the restaurant for the benefit since we aren’t going to be open for quite a while. Everyone has been very kind and helpful with their time and donations. It is a testament to the type of person Larissa is.”

As for the driver and passenger of the pickup truck involved in the accident, John Stephens of Mindemoya told The Expositor in an email August 3, “As of this writing, Friday, July 30, a full 10 days after the accident, the driver of the totaled pickup has not received the accident report from the OPP. The truck was legally travelling eastbound and had (the right of way), as video from Jake’s clearly shows.”

“The driver of the truck (an 18-year-old female), and her nine-year-old brother were uninjured, saved by the airbags (in the vehicle),” wrote Mr. Stephens. “(The teen) said she was initially very concerned because her brother seemed to be having trouble with the force of the airbag.”

Mr. Stephens said that the teen recently graduated from Manitoulin Secondary School and plans to study in Sault Ste. Marie to become a nurse. “She works hard, presently at two jobs to save for her education. Her 2003 Chevy pickup truck was her joy and she had restored it to be a good vehicle to confidently last her for the next years.”

“Now it sits, totaled and impounded in the OPP yard in Little Current,” continued Mr. Stephens. He explained her insurance company can’t proceed with the claim without an accident report, however, the OPP has still not produced one. She needs to get the process of finding another vehicle started as fall approaches and she is running out of time.”

“All of us on the Island, all your readers, are, of course paying for the best outcome for Larissa Moffatt, and we all feel for her family,” continued Mr. Stephens. “Unfortunately, the results of accidents produce more than one victim, but (the teen’s) troubles should have been resolved a week ago. All of the victims need help. The many political calls for action should have been directed at the whole picture, not at more flashing lights.”