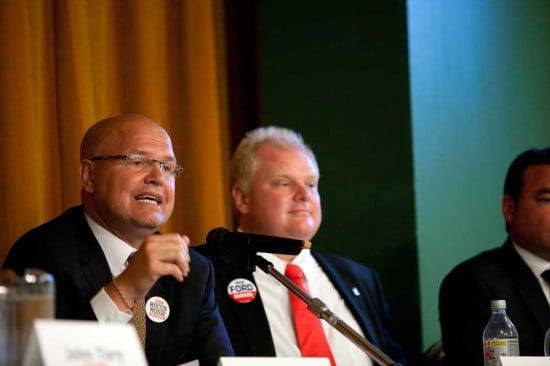 Toronto’s Mayor Rob Ford is certainly the author of his own recent misfortune. He chose to vote on a motion to set aside a previous ruling that he should himself pay back monies raised by his football charity directly from an appeal from him written on City of Toronto letterhead. Ironically, the motion that would have Mr. Ford off the financial hook would have passed handily without his vote.

Instead, Mr. Ford stubbornly acted as a party to the debate and it was not the solicitation of a donation for his football charity, using city letterhead, that has resulted in the successful bid to remove him from office but the clear conflict he engaged in when he voted on this motion.

Mr. Ford may or may not be successful in being granted an appeal which may overturn the recent judicial decision to terminate his role as mayor of Toronto.

But Mr. Ford’s debacle certainly underscores the recent trend in municipal politics that shows us that even after winning election, municipal politicians are subject to more scrutiny than ever, just as the embattled Toronto mayor’s situation demonstrates.

Mr. Ford, by his very nature, is a polarizing figure and as such attracted supporters and detractors, both groups enthusiastic in their points of view.

Mr. Ford had far more supporters than detractors two years ago when he ran away with the Toronto mayor’s job, defeating his main rival (former Ontario government cabinet minister George Smitherman) by a cool 100,000 votes.

The thing is, Mr. Ford, because of his bombastic presence, had kept alive the spirit of that other large group of voters who had not supported him and it was from within this cadre that the charge of conflict arose.

In our own backyards, recent municipal elections have also been the genesis of local watchdog groups.

In the Northeast Town, several councilors who lost their seats in the 2006 municipal election were active in the startup of a Ratepayers’ Association that was organized early in the term of the next mayor and council.

Similarly, following the 2010 municipal election, an unsuccessful mayoral candidate in the Town of Espanola helped organize a watchdog organization that has, according to the Espanola paper, questioned much of the actions of the current mayor and council.

This trend has found favour in our small towns just at the same time as money grows ever tighter and these citizen groups see themselves as the guardians of the taxpayer’s cash flow, at least with respect to municipal tax increases.

Ratepayers associations can be mutually beneficial as those seeking office, or seeking reelection, can curry much favour by agreeing to “hold the line on taxes.” Certainly in the first two years of the current council in the Northeast Town, a “zero tax increase” became the watchword at budget time.

In Mr. Ford’s case, the situation is different enough from that of our small Northern communities but it is not completely a different matter.

His detractors have been keeping a close eye on Mr. Ford and his allies, waiting for him to false-foot and when the opportunity was presented to them, they made the most of it and have succeeded, at least for now, in ending his term.

In the case of the Northeast Town, the ratepayers group has been polite but vigilant and meet regularly with the town’s chief officials in order to present their viewpoints.

In Espanola, it appeared the model was closer to that of Toronto as the organization spoke out regularly for over a year on many of council’s actions although their voice seems calmer now so perhaps they’ve taken a leaf from their Northeast Town neighbours.

Municipally elected officials have been subject to more and more scrutiny in recent years so organizations setting themselves up as “official” watchdogs seems like an inevitable evolution.

In Mr. Ford’s dramatic case, we can expect to hear more, likely much more, from and about this football-loving politician.