LITTLE CURRENT—The Manitoulin Secondary School (MSS) Mustangs played their home opener game Friday, October 26 against the Central Algoma Huskies in Little Current. Although they fought hard for the win, the Huskies emerged victorious when all was over.

“So far (the team) has played two exhibition games together. They’re really coming together so far; the future is bright for this team,” said assistant coach Jordan Smith.

The Mustangs wrestled puck possession off the top of the game and fought hard off the top. At the beginning, a number of their passes came close but ultimately missed their marks. As the game progressed they seemed to tighten things up.

The Huskies garnered the first penalty of the game, a tripping call against the Huskies’ Mason Mortimore who had gone after the Mustangs’ Eric Varey.

Less than five minutes into the first period, Mustangs goalie Shannon Debassige made a save but the puck almost lazily slid into the net undetected after the initial block.

The Mustangs’ Matt Redmond got a holding penalty shortly thereafter, and Shannon continued to make a number of close saves.

With nearly eight minutes remaining in the first period, the first blood of the game had been drawn—Huskies’ Nick Purnis netted a goal with the help of Caden King and Kayne Mortimore. 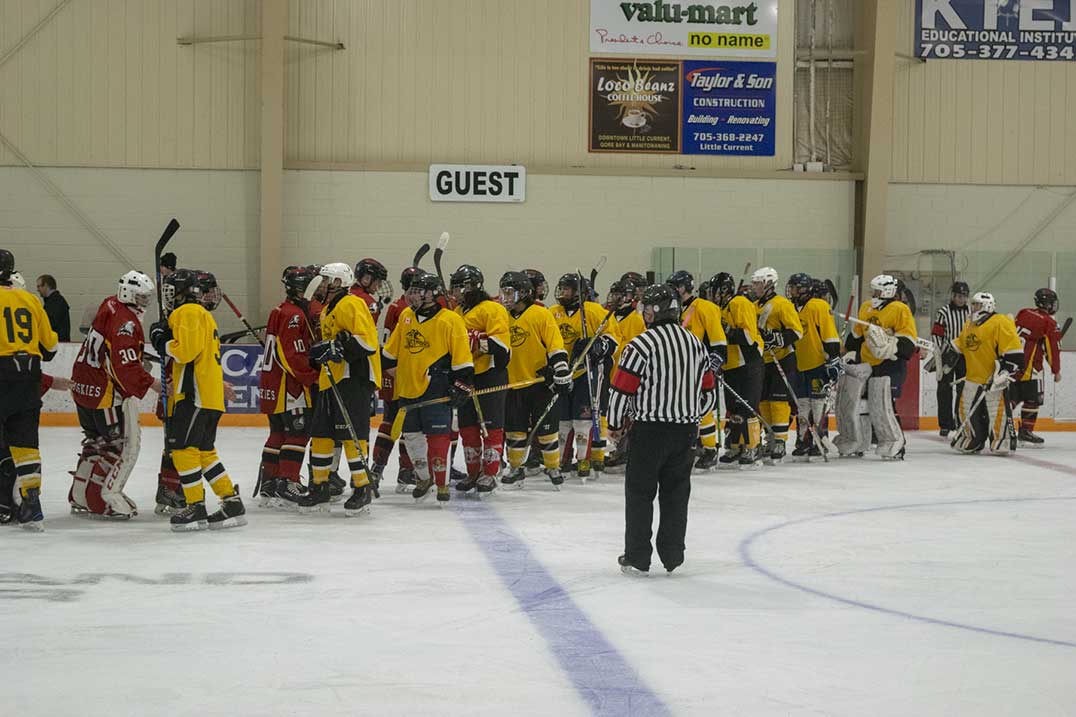 As the period drew to a close, the Mustangs’ Jayden Little received a head contact penalty and Shannon made a great save right as the buzzer sounded.

The action heated up considerably in the second period. Less than a minute in, Kayne scored the second goal for the Huskies, earning Nick and Caden assists.

Not to be outdone, Maverick Bushey fired back with a slapshot goal from the blue line, putting the Mustangs on the board. Josh Robinson took the assist.

The Huskies began to ramp up their efforts and only a minute later, Mason scored a power play goal with Cole Ouimette getting the assist. It seemed to happen in slow motion; Mason positioned himself and waited for the perfect moment to tip the puck into a gap in Shannon’s defences.

The Mustangs kept the pressure on, however, and Eric shot in an unassisted goal to bring the score to 3-2.

Shortly thereafter, the Mustangs’ Shannon made a series of good saves during a line of steady bombardment from the Huskies. With five minutes to go in the second period, the Mustangs’ Jayden Little emerged on a strong breakaway but was stopped at the goalposts.

During a series of close skirmishes on the Mustangs’ side, the Huskies lost track of the puck amid some confusion but eventually regained control.

Into the third period, the Huskies’ Caden scored a shorthanded goal, followed four minutes later by a goal from the Mustangs’ Connor Bellmore, assisted by Zack Paul.

The Mustangs still had a fighting chance, down only one goal, but the Huskies sealed any hope of overtime with their fifth and final goal by Ethan Cooke late in the third period.

After a timeout call with just shy of two minutes remaining in the game, the Mustangs elected to pull their goalie for one final offensive push. It proved unsuccessful, but they were at least able to prevent any further goals from the Huskies. As the final buzzer sounded, the final score was 5-3 for the Huskies.

“We’re fairly optimistic,” said coach Steve Doane of the performance. “Central Algoma traditionally has a very good team, so we’ve thrown them into the fire early to test them and work out the team dynamics.”

Mr. Doane said there is no AA midget division this year, meaning the players have filtered down into other leagues.

“This year should be very competitive,” he said. He and Mr. Smith have been coaching together for three years.

The Mustangs’ lineup changed considerably over last year. There were eight new players added to the team.

“We have a pretty young defense but they’re fairly quick,” said Mr. Doane. “Lots of our players came up through the Panthers organization so they have really good skills.”