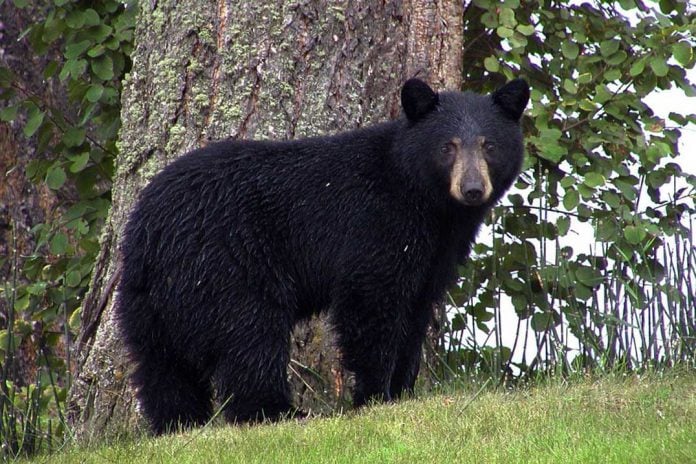 MINDEMOYA—Contrary to some popular opinion, the Ontario Ministry of Natural Resources and Forestry (OMNRF) does not relocate bears, cougars or elephants to the western side of Manitoulin, according to Mike McIntosh of Bear with Us, a sanctuary and rehabilitation centre for bears.

Mr. McIntosh was the guest speaker at the March 23 meeting of the Manitoulin Nature Club and he had a great deal of black bear information to share.

Mr. McIntosh has worked with bears for 26 years. He explained that he began his interest as  a youngster by photographing wildlife and then became fascinated by bears. “I became curious about perceived dangerous predators and human misunderstanding of these amazing creatures,” he said. “I am especially intrigued by bears, given their high intelligence and unique cognitive abilities.”

He approached the OMNRF in 1992 to seek approval to work with the rehabilitation of orphaned cubs and injured bears and has helped over 500 motherless and hurt bears return to the wild.

Mr. McIntosh is required to renew the OMNRF Authorizations each year. These include that he will keep captive, rehabilitate  and return black bears to the wild, and keep black bears permanently which he may have to do with ones that have come from a circus, from an overstocked zoo or that have been kept illegally as pets. The third authorization is  that Mr. McIntosh will act as an agent to resolve conflicts between humans and bears and this may require the removal of food, the taking down of bird feeders in the summer or live trapping and relocation.

Mr. McIntosh travels extensively to educate people about bears, talking to groups in provincial parks, schools, nature clubs, the Boy cubs and Scouts and has a special Facebook Page by Molly Bear.

There are four large enclosures for these animals on Mr. McIntosh’s property. He explained that he tries to keep bears from one district together. “Siblings stay together for quite a long period of time after leaving their mother,” he explained.

Mr. McIntosh went on to talk about the lives of bears. “They are omnivores,” he said. “Bears will go after rabbit feed, chicken feed and so on, not the animal itself. There is not much reason to fear bears,” he said. “People can live with real bears roaming the world.”

He explained that bears are born in January and the den emergence takes place in late April, early May. The mother can have four or five cubs, but usually less and it has been documented that mothers will sometimes adopt orphaned cubs. He showed pictures of a bear emerging from her den in Tennessee with her cubs and explained that bears will hibernate even in warm climates in places such as Florida and will sometimes sleep on the ground, not in a den. A recent Sudbury Star article featured a young bear that had emerged from her den in that city. The couple who saw this bear are convinced that she bedded down on their property in a hole underneath a cement pad.

The mother looks for a large tree for her cubs to climb after they have gained strength and can go up the tree for safety while she forages for food. At this time of year she will be eating leaves, grass, grubs and so on until berry season and, as Mr. McIntosh said, “a bear’s life is all about food,” and emphasized the need to take down bird feeders in April and put them back out when there is snow on the ground and to take care of garbage properly.

The lifespan of Ontario’s black bears is 30-plus years and bears usually die of old age with the exception of being hit by cars or shot. Mr. McIntosh told his audience of a bear in New York State in the 1970’s that was 40 years old and of a collared bear in Minnesota that lived for 39.5 years. He tracks his bears with ear tags.

Mr. McIntosh spent some time speaking of the interaction between bears and people. He showed video of his trip to Russia where a friend was studying brown bears and one could plainly see the nervousness of one bear when she spotted the people filming her. Her state became clear when her cubs were shown. “Bears are not aggressive,” Mr. McIntosh said. “They are nervous. They will stomp the ground and snort. Bears very seldom attack, but dogs off leash are involved in 50 percent of cases when they do. Sixty-seven people have been killed by bears in North America since 1900 while a much larger number have been killed by dogs. One very interesting fact about bears that Mr. McIntosh explained is that bears do not growl. When one sees a seemingly ferocious bear in a movie or on the National Geographic channel, the growling noises have been dubbed in.

Mr. McIntosh also explained to the Nature Club members that bear populations do not change. “Contrary to popular belief,” he said, “the bear population did not explode when the bear hunt was cancelled. The bear population throughout Ontario is probably low.” He went on to ask, “how many bears will the population hold? How many will people tolerate? The same goes for coyotes or wolves.”

For more information about bears, go to bearwithus.org.

The Manitoulin Nature Club welcomes new members. There are currently 68 members and they meet on the last Friday of the month from September until May at the Anglican Church in Mindemoya at 7:30 pm The April 27 meeting will see club president Marcel Beneteau talk of his Patagonia adventures while Vince Deschamps of the Nature Conservancy of Canada will be the guest speaker in May with a talk on Freshwater on Manitoulin and Cockburn. There are outings every month and include Birding at South Baymouth with Chris Bell on May 19, Beekeeping 101 in June as well as a trip to the Fielding  Memorial Park in Lively, hikes and visits to the Fall Fair and Museum in Sheguiandah. Club members also do a Christmas bird count.

The cost of membership is $20 a year and non-members will pay $5 to go on any outings. The first club meeting is free.