SHEGUIANDAH—Although residents of Manitoulin Island are used to experiencing nature on a daily basis, there is a special connection with the natural world when squirrels, chipmunks, or perhaps a deer, along with a variety of birds come to our backyards to feed. Observing wildlife up close through a window of your home or from a chair on your deck or porch provides us with a feeling of warmth and well being that some argue is a basic necessity of human existence.

Watching small birds flitting to and from a feeder in the backyard is a calming and relaxing experience enjoyed by all, but occasionally there are ornithological experiences that are so shocking, they test the resolve of even the strongest of hearts.

Such an experience happened to me at our trailer at Batman’s Campground on Mother’s Day as I was on my hands and knees removing the accumulation of last season’s leaves from one of our flowerbeds. Unbeknownst to me, I had been slowly and quietly working towards a ruffed grouse that had chosen her nesting site at the edge of the steps to our deck.

Imagine the surprise when my hand came close or perhaps touched this chicken-sized, well camouflaged bird causing it to explode unexpectedly towards my face as it escaped from a perceived predator!

I had instantly closed my eyes when the bird sprang upwards and was unaware as to whether she flew or ran from the nest. All I remember was hollering and instantly springing my 6’ foot 4” frame onto my feet and dancing away holding my chest.

By coincidence, our neighbour Jim Olivier, who lives in the trailer across the street, saw the whole event unfold and told me later that the bird did not fly but instead ran from the nest site as I bolted upright. Jim had watched me dance around the foot of the stairs as I struggled to reduce my heartbeat and reportedly called, in his characteristically soft and calm voice, for his wife Pauline Scanlan to come from the kitchen and ‘look at Joe as I think he is having a heart attack.’

My wife Marilyn had come around from the side of the trailer to investigate the commotion and when we approached the nest, at least five cream-coloured eggs were visible in the thick mat of leaves. We were concerned that my scaring the bird would prevent her from returning, but about 45 minutes later, she was back on the nest.

To our utter amazement, the hen remained on the nest while we continued to walk up and down the stairs. Even more astonishing was that the bird didn’t move when our sheltie Tara repeatedly walked within two feet, nor did the dog detect her presence. We expected that a ground-nesting bird would be programmed to quickly abandon her nest if a fox-sized animal approached too closely. Apparently, nesting females are odourless which would make their detection by foxes and other predators almost impossible.

I used a telephoto lens to take photographs of the hen; however, she allowed me to approach within four feet. Throughout her portrait taking ordeal, she never flexed a feather and stared straight ahead with black, beady eyes.

The scientific name of ruffed grouse is Bonasa umbellus which comes from Latin bonasa meaning “good when roasted” and umbellus meaning “a sunshade.” Sunshade refers to the dark neck feathers, particularly large in the male, that are also called the ruff. The flecked plumage can range from grey to red or a shade of mahogany and is affected by its habitat as it uses camouflage to protect itself from predators.

Although primarily a ground-dwelling bird, ruffed grouse are skilled at flying in short spurts and can make rapid twists and turns, which helps them fly in amid thick forest growth.

They are well adapted to life in all seasons in the thick brush of Manitoulin where they feed as scratchers from spring to fall which means they use their feet to rummage through the leaf litter in search of insects and seeds. They also eat leaves, buds, and fruit. In the winter their primary food is buds of aspen and birch.

Grouse love winter and thrive when many other species of birds succumb to extreme cold events of the kind we experienced this past winter. On cold winter nights, they simply dive deep into a snow bank and let the insulating qualities of snow keep them warm.

One of the most notable characteristics of ruffed grouse is the sound made by males when they undergo a spring mating ritual known as “drumming.” Males stand on a platform, such as a rock, log or stump, and begin beating the air with their wings. They start slowly and then beat more rapidly, creating a hollow, drumming sound which not only attracts females but also defends their territory from other males. The sound is so deep that you almost feel it more than hear it.

Females lay between nine and 12 eggs which are buff-coloured with brown specks. They are incubated for about 24 days which means that the eggs near our deck may not hatch until near the end of May. If all goes well, some of these chicks may be ready to establish a nest next spring in another Manitoulin backyard.

Joe Shorthouse is a retired university professor and a summer resident at Batman’s Campground who enjoys learning and writing about the natural history of Manitoulin Island. 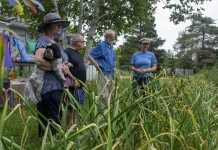 Productive, year-round gardening in a smaller space in Tehkummah 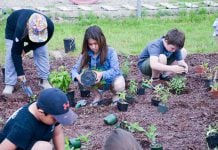 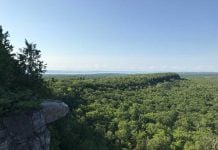 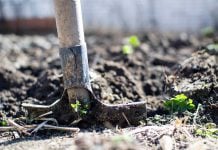 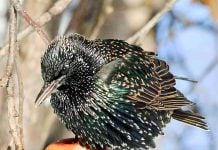 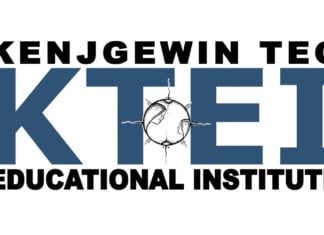