﻿RAINBOW DISTRICT—The Sudbury Student Services Consortium (SSSC) has outlined new technology that is being installed on buses and is designed to improve school bus safety. And the new technology, which includes the mandating of new amber-red light warning systems on school buses, is being welcomed by a local school bus company.

“As school bus drivers, we are talking about the kids’ and drivers’ safety, which is crucial,” stated Robert Brown, of Carl Brown Bus. “Members of the public need to know of all these changes that are being made to improve safety. If the new rules and technology in place can help, we are in favour of it.”

The new eight amber-red light warning system is going to be in place on all school buses, with the goal of increasing rider safety and decreasing the number of motorists who do not stop for school buses.

Under the system, when you’re driving and a school bus approaches, motorists will have to watch and if the bus slows and flashes its overhead amber lights, it means that the bus is coming to a stop to pick up or drop off passengers. When drivers see a school bus with its overhead amber lights flashing, you need to slow down and prepare to stop whether you are behind or approaching a bus.

When the bus stops and flashes its overhead red lights and activates its stop-arm, this alerts other motor vehicle drivers that the bus has stopped to pickup or drop off passengers. It is dangerous and illegal to fail to stop for a stopped school bus that has its overhead right lights flashing or its stop arm activated.

Before continuing on their way, motorists must wait for the bus to start moving, for the overhead red lights to stop flashing and wait until the stop arm is no longer activated.

If a driver goes past a stopped school bus with its overhead red lights flashing or its stop arm activated,  drivers face a first offence fine ranging from $400 to $2,000 and six demerit points. For each following offence, the fines range from $1,000 to $4,000 along with six demerit points and possible jail time of up to six months.

The registered owner of a vehicle illegally passing a school bus that is caught by camera technology may be charged and fined.

These  updated safety lighting requirements took effect July 1, requiring all buses manufactured on or after January 2005 to switch to the new system. Buses will have to display revised signage on the rear of their vehicles to read, ‘Do not pass when red lights flashing.’

Renee Boucher, executive director of SSSC told The Expositor as well, “we are going to have tablets equipped on school buses for drivers; information that they can access hands-free so they won’t need anything that is handheld with software so they have turn-by-turn directions and be able to see the students’ names and have all the information they need at bus pick up and drop off locations.”

Students will be given a QR code that will be checked when they are getting on or off the bus and parents will be able to download a free app, said Ms. Boucher.

“This is a really good program and helps the drivers and the students,” said Ms. Boucher.

“The notifications will tell them when the bus is approaching, when the bus is leaving their particular stop and when it’s dropping the student off at the school,” said Ms. Boucher.

Ms.  Boucher pointed out that, as part of a pilot project, some buses will also be equipped with stop arm cameras. The cameras capture licence plate numbers of traffic violators and tag the video evidence with date, time and GPS location.

Ontario passed legislation in 2020 that allows footage from the stop arm cameras to be used in court.

“There are a lot of good changes coming,” stated Ms. Boucher. 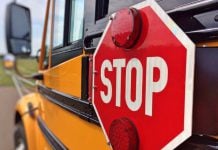 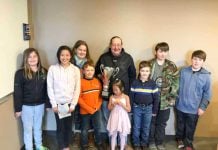