﻿GORE BAY—“I feel so fortunate, and it is with gratitude that we made the decision to stay here and Patti and I have raised four kids on the Island. It has been fantastic,” stated Dan Smith, who retired as a teacher at Charles C. McLean Public School at the end of the past school year.

Mr. Smith completed his 27th year of teaching after undergoing a change in careers with the Sudbury Parks and Recreation department. “I started at C.C. McLean in 1995 to teach French and physical education, and have taught other courses as well,” said Mr. Smith. He had left the school at one point, after 17 years at C.C. McLean. “It was taking Patti a bit of time to get her transfer to the Manitoulin OPP (Ontario Provincial Police) and I was teaching in Sudbury and coaching my son in triple A hockey. I taught in Sudbury for two years. Once we moved back to the Island, we have been here ever since.”

When he was growing up in Sudbury, “I was 16 when I was asked to teach summer school, French, for the Catholic board. French is my first language, and so I taught Grade 7-8 students in summer school.”

“I went to college after working for the City of Sudbury, and got involved in golf, volleyball and track at Laurentian University,” said Mr. Smith. He also redshirted for the men’s volleyball team, practicing with them as well as with the track and field team. “I wasn’t super in any one sport, but good enough to make the varsity team.”

“When Patti and I first came to the Island she was stationed on Manitoulin with the OPP. We spent four or five years in Gore Bay and then figured we would head back to Sudbury eventually,” said Mr. Smith. “Twenty-seven years later and having had four kids, we are still here.

“One of the many draws we have to the Island is that Patti’s dad Murray is originally from Barrie Island and her grandmother was living in the Millsite Apartment building.”

“My oldest son lives in Montreal, and Andrew is a police officer while Alex is a teacher in Walkerton,” said Mr. Smith.

“I am definitely looking forward to retirement. I could have retired last year, but our daughter was finishing Grade 8 this year (at C.C. McLean) and that was an incentive to stay for one more year. And with COVID and restrictions I hoped to have a pretty normal last year of teaching,” continued Mr. Smith.

Mr. Smith has a love of sports, coaching eight teams at C.C. McLean, besides coaching local Gore Bay minor hockey teams. “Being at school with kids never felt like work to me. It was fun, sports, and watching them develop as athletes, students and growing up. As a phys-ed and French language teacher, I was teaching every grade every year. Every student was with me for half an hour to an hour every day during the school year. One of the things that is nice to know is that over the past 27 years, students from age 4-41 in this area, I’ve taught them and now I am teaching their kids. It’s special.”

“Kids always remember the simplest things, they don’t remember a great lesson in math, or language. It’s the special trips, tournaments, games and activities that they remember,” said Mr. Smith. “I had the opportunity to teach many wonderful students over the years.”

He pointed out he taught some of the current teachers at C.C. McLean when they were kids.

“The best compliments I’ve received from former students-athletes is that while they might never have been great at sports, ‘but you believed in me, gave me confidence and made me feel an important part of the team,’ and because of it they stayed active in sports into adulthood. This was always a goal of mine to keep students active and healthy.”

“I also believed it was important to try to encourage kids to turn to sport, because it leads to active, physical healthy lifestyles,” said Mr. Smith. “And they develop transferable skills, working together as a team and they develop confidence.”

When he was first looking for a teaching job, Mr. Smith originally wanted to teach in secondary school. “Mac Hall, Director of Education for the former Manitoulin Board of Education hired me. Mac told me, ‘Don Bosley (former principal at C.C. Mclean) would love you to teach and get involved in coaching sports at the school,’ and he asked if I happened to speak French. He set up an appointment with Don and I was hired right there.”

“After about four years I was fortunate that Anna Armstrong (principal at C.C. McLean at the time) asked me to be the teacher in charge (replacing the principal on days the principal had work and meetings out of school) which I did for about 15 years,” he explained. “(The late) Jean Hanson (former director of education) and the school board was pushing for me to become a principal, but I wanted to stay at C.C. McLean.”

“I have loved teaching, coaching and spending time with the kids at the school,” said Mr. Smith. “And a lot of the students I coached in minor hockey as well.”

“I have had a fantastic career at C.C. McLean,” said Mr. Smith. “For me, if it wasn’t for sports I never would have become a teacher. Even when I was young, school was so much more interesting to me because of the sports I could also play. I had no aspiration to teach math or other subjects. I loved phys-ed and it was the driving force behind me becoming a teacher.”

“At this point, with retirement, I will supply teach for a couple of years until Patti retires from the OPP,” said Mr. Smith. “I won’t commit to too much right now, but I’m sure I will be involved in track meets and coaching, maybe at (Manitoulin Secondary School) and definitely at C.C. McLean.”

“When you have students that you teach 10 years, they become like your own children,” continued Mr. Smith. “We are their parents at school. When they graduate, you are happy and proud for them but sad because they are moving on to the next level of school. That is what I’ve always loved about community school; you get to know the students as a person and watch them develop over the years.”

In 2019 Mr. Smith received the Outstanding Contribution to Co-Curricular Programs (coaching etc.) award from the RDSB. In 2012 he had been requested to train two teachers from every elementary school within the board (at a full-day professional development seminar) on how to implement the new Provincial Physical and Health Education curriculum. 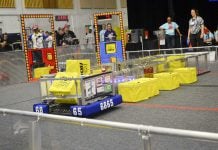 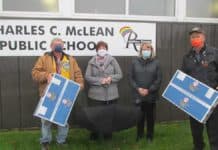 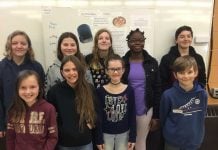 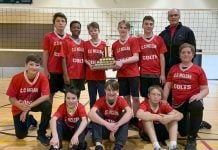 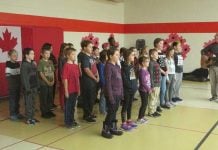 C.C. McLean remembers all those who have fought for Canada’s peace