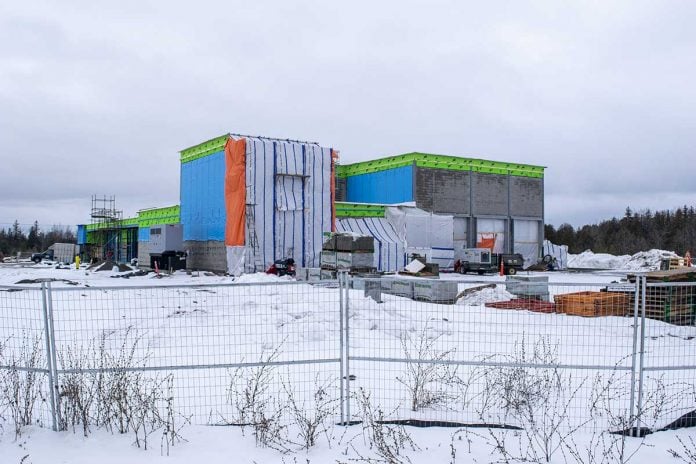 “Our members are starting to get excited about being able to move into a new facility in the near future. Having these more modern facilities will make our work environment much better,” said Inspector Megan Cavanagh, detachment commander for the Manitoulin OPP.

This site is one of nine new OPP detachments being built across the province by Bird Construction.

Work began at the corner of Hayward and Cockburn streets in Little Current on April 1, 2019. At the time, the estimated completion date for the 10- to 12-thousand square foot facility was late in the summer of 2020.

“We have been working diligently to complete the detachment on time and on budget, as we know the detachments are a priority for communities across Ontario. The Little Current project is currently on schedule and on budget,” stated the construction firm in an email to The Expositor.

When complete, this detachment and others in the province will include a secure functions area complete with holding cells, interview rooms, a public admittance area, admin spaces for staff and management and an operations-focused area that includes offices and evidence storage.

“The modern facilities will certainly benefit the investigative processes, making them a lot easier, more maneuverable, and will certainly assist in increasing our overall effectiveness,” said Inspector Cavanagh.

A specific date has not yet been set for when operations will officially move from the current building near downtown Little Current to the new centre.

The detachment has been in the news in recent weeks over some individuals’ thoughts that having a police facility located on Boozeneck Road might send mixed messages about the force.

The street has since been renamed to Boosneck Road, after some researching in this newspaper’s archives helped to identify the origin of the name. Subsequent research on the name by Island historian Bill Caesar revealed that the most accurate origin of the name might be an 1870s-era Polish immigrant whose last name was Buznik. However, the road will remain as ‘Boosneck’ going forward.

When asked, Inspector Cavanagh said with a chuckle that she preferred not to comment on the name change saga.