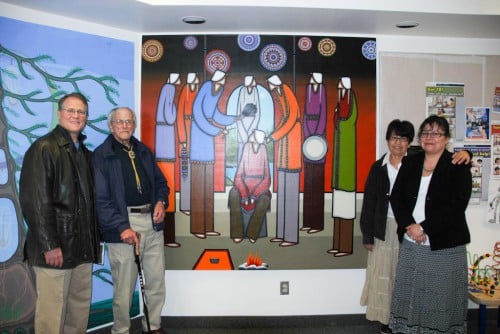 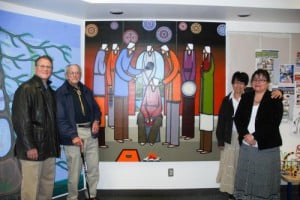 WIKWEMIKONG—During the one-year memorial of his friend and partner in medicine, Dr. Jack Bailey shared in the sunrise ceremony at the medicine lodge at the Nahndahweh Tchigehgamig Wikwemikong Health Centre he and the late Ron Wakegijig worked so hard to develop.

Following the ceremony (a full house) the group gathered in the lobby of the Health Centre for the unveiling, to much applause, of a work of art commissioned by Dr. Bailey’s son Michael by Wikwemikong artist Leland Bell. The massive piece depicts both Dr. Bailey and the late Ron Wakegijig working together, standing beside a seated patient inside a healing lodge.

The person in blue holding a fan is Gaikezheyongai (Swift Wing, Dr. Bailey’s Anishinaabek name) and the woman behind him in the purple is Dr. Bailey’s wife Joyce. The person in yellow is Mr. Wakegijjik with the woman in green representing his wife Rosemary.

“These leaders have set many trends in the area of healing by practicing tolerance, acceptance and understanding of each other’s world views,” Mr. Bell shared through an email with Michael Bailey. “The feeling I was trying to achieve by placing them inside looking out is to show the strength of healing work. The beaded circles represent the energies of life. I usually use seven circles, but I use the white circle in reference to the eight levels of knowledge that I first heard of when I first began learning my teachings. The two poles represent the notion of regaining balance. The fire and water (centre, just inside the painting’s bottom frame) represent life forces. I wanted to show that these people are comfortable in their place of strength—their work.”

The title of the piece is ‘Visionaries: Gaikezheyongai and Wakegijig.’

Dr. Annelind Wakegijig, the daughter of the late Ron Wakegijig, thanked everyone for attending the ceremony and unveiling.

“This day is so powerful,” she said. “‘Gathering and goodwill among people is strong medicine,’ he’d say. He probably touched everyone in some small way. I really feel that I walk in two worlds—both medicines. I feel like I’m the person in the middle of the painting.”

“I feel a huge responsibility to share my father’s healing spirit as a Western physician—I feel him when I have a challenging case, when I work with my people,” the doctor continued. Dr. Wakegijig is a physician in Sault Ste. Marie.

Dr. Wakegijig added that Dr. Bailey delivered her into this world and was also the cause of her striving to become a medical doctor.

The 89-year-old doctor also had a chance to share some of his wisdom with first year Northern Ontario School of Medicine students who were also in attendance. The group of four students were excited to meet the man they had heard so much about since their time on Manitoulin and Dr. Bailey was eager to share the work he and Mr. Wakegijig put into the curriculum of the school they attend. Dr. Bailey also shared with the group that 30 years ago, had the College of Physicians learned of his involvement with a traditional healer, he would have been called to account as that was the culture of Western medicine at that time.

Throughout the day, Wiky TV5 broadcast old events celebrating Mr. Wakegijig, including a CTV health segment with correspondent Avis Favro from the 1980s, which aired on its national news program. The feature spoke of the meeting of Western and traditional medicine and showed footage of the two friends working together.

Throughout the day, Dr. Bailey’s name was mentioned time and again as an important aspect of the life of the man being celebrated and he was also honoured by the community with the gift of a blanket, presented to him by Chief Hazel Fox-Recollet.

The painting ‘Visionaries: Gaikezheyongai and Wakegijig’ can be viewed at the Wikwemikong Health Centre.