MANITOWANING – Doug Gilmour, the former National Hockey League (NHL) superstar, will be trading in his hockey stick for golf clubs as he participates in the first Cancom Security charity golf tournament being held in August at the Rainbow Ridge Golf Course in Manitowaning.

“Cancom Security is holding their first charity golf tournament and will have several guests from Barrie, along with Doug Gilmour and probably another couple of former hockey players,” said John Dube, manager of Rainbow Ridge, last week.

“Save the date and join me at the Cancom Security charity golf tournament on Saturday, August 21 at the Rainbow Ridge Golf Course on Manitoulin Island,” said Mr. Gilmour on a Facebook post. “Play 18 holes on this championship golf course and support Wiikwemkoong Minor Hockey and Anishinaabemowin Education. Let’s make every child matter through sport and education the foundation for our youth. I’ll see you there!”

Doug Gilmour played 20 seasons in the NHL for several different teams. He was a seventh-round draft selection, 134th overall, of the St. Louis Blues at the 1982 NHL entry draft and recorded 1,414 points in 1,474 games in the NHL between 1983 and 2003. A two-time all-star, he was a member of Calgary’s 1989 Stanley Cup championship team and won the Frank J. Selke Trophy as the NHL’s best defensive forward in 1992-1993. Internationally, he represented Canada three times during his career and was a member of the nation’s 1987 Canada Cup championship team.

Mr. Gilmour was inducted into the Hockey Hall of Fame and the Ontario Sports Hall of Fame in 2011. His uniform number 93 is retired by the Toronto Maple Leafs.

Mr. Dube told the Recorder, “there will be a limit on the number of teams in the tournament. At this point we are planning a shotgun start, if restrictions are lessened by the province. If not, we will go with tee times. We are still working out all the details, with all the uncertainties with the pandemic. Right now, there is a limit of 36 teams but if we can go to tee times there will be more teams allowed.”

All participants will have to register for the tournament, with teams (of four) to pay an entry fee of $800. There will be a scramble format, with teams in ladies’ and co-ed divisions. A dinner is being planned, but will probably be held off-site of the golf course, although final details are to be worked out.

Mr. Dube said that there is already a lot of interest being shown by those interested in taking part in the tournament. “We are receiving calls from people in Toronto, Windsor and other locations asking about playing in the tournament.” 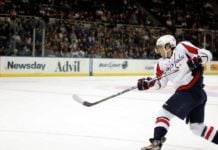