“Elder Lewis Debassige had a vision that the locals learn how to harvest traditional corn,” noted OCF Executive Director Peggy Simon. “The workshop is a three-part series.”

Part one, she explained, was an on-site traditional teaching from Dan Kimewon that focussed on demonstrating how to prepare the corn. While part two would continue the steps with the first group, on how to prepare a batch for traditional feasts during the year.  A guide will be produced so that the tradition will continue and in part three, each of the participants were provided with seeds to plant the corn.

The instructor, Dan Kimewon, who is originally from Wikwemikong and now resides in Saugeen, came to the Ojibwe Cultural Foundation to share the teaching he learned as a child, explained Ms. Simon. He credits his knowledge on his early years spending time learning the old ways from his mother Angeline Kimewon.

The process followed by Mr. Kimewon is to start seeds in an eggshell and soil indoors. When the seedling reaches approximately eight inches, it can be transplanted outside.

“Plant corn on a mound beside pole beans,” he advised. “Besides providing the necessary nutrients, the beans have something to climb on. Around the corn, plant squash which keeps weeds to minimum and keeps out critters.” To avoid contamination of the traditional seed stock, he advised the participants to “make sure there is no other type of corn planted nearby.”

In the harvesting process, corn is braided and hung to dry before being shucked as needed.

To process the corn for use, ashes from sugar maple are required. “Although any hardwood will work, oak, ironwood and the like, I prefer to use maple as there is still the sweetness of the medicine in the wood,” he said, adding that only cedar and birch bark should be used for kindling. “After ashes have cooled off, sift the ashes using a wire strainer,” he said. Then boil water in a stainless steel pot (an enamel pot may also be used). Save half of the water and put it in another pot. Add one measure of ashes to two measures of corn into boiling water.

The colour of corn will change from white to orange/red to yellow as it approaches readiness, noted Mr. Kimewon.

Mr. Kimewon made a tray with chicken wire, leaving a hole in the corner.

“Keep stirring the pot and drain and rinse through tray with wire mesh after about one hour,” he said. “Rub the corn until kernels fall off and then rinse the pot well.”

“Harvesting traditional corn is a very time consuming activity,” admitted Ms. Simon, “but people who try it agree it is well worth the effort.”

The workshops are sponsored by the Ontario Arts Council and the OCF. 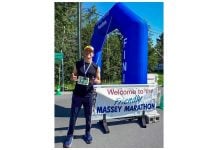 Islander successful in ultra-marathon run to raise funds for OCF 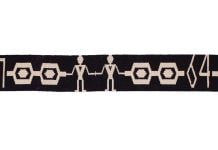 Spirit of co-operation illustrated by 1764 wampum a modern lesson 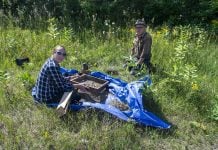 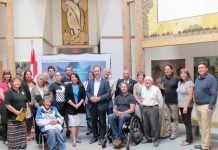 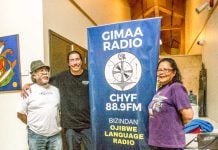