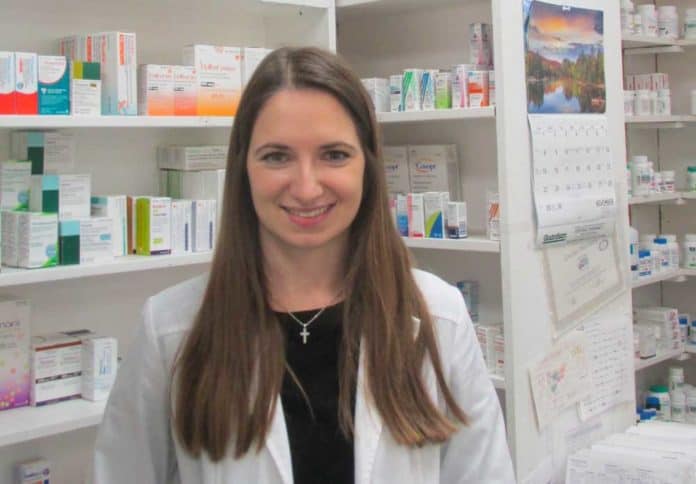 ﻿The small town life is ideal for Oksana Zlupko and her family.

“We love living and working here,” stated Ms. Zlupko, a pharmacist at Central Pharmacy in Gore Bay. “Between working and paying bills in a big city life can get hectic pretty quickly. Living in a small town gives you a chance to take it slow and easy. You get to look around and appreciate the meaningful things in life you would normally unconsciously overlook in a big city.”

“With everything that a small town has to offer, you will be able to relax and enjoy the life you are living,” said Oksana.

Ms. Zlupko is originally from Ukraine. “In 2009 I moved here to Canada with my parents and my sister,” she told The Expositor. “Two years after arriving in Canada I married my husband Terry, who is also from a small town in Ukraine. Living in a big city was different for us, because we were born and raised in small towns. So, when the opportunity came to live and work in a small community in Manitoba we moved right away.”

In Manitoba, Oksana was working for a pharmacy, however, “my boss sold the business, and we moved back to Toronto.”

“Yes, I saw an advertisement for an opening for a pharmacist here at Central Pharmacy,” Oksana told the Recorder. The store owner, Kidane Gebrekristose, “said come here and let’s talk.” Well, they talked but Oksana and her husband didn’t have to come to Gore Bay to check it out before moving here. “No, because we wanted to live in a small community,” she said, noting her husband Terry works in the telecom industry-from home.

The couple live in Gore Bay, “and have a child, Andrew, who is almost two years old,” she said. “Yes, we love living here, and love the slow-paced environment, strong sense of community, outdoors, and no traffic.”

“I love working here, I get a chance to get to know people and develop long term relationships, help manage people’s health lives and stay healthy,” she added.

Oksana and her family moved to Gore Bay to live and work in May 2019.

Remember that when you shop locally, you’re supporting friends and neighbours like Oksana Zlupko at Central Pharmacy in Gore Bay.