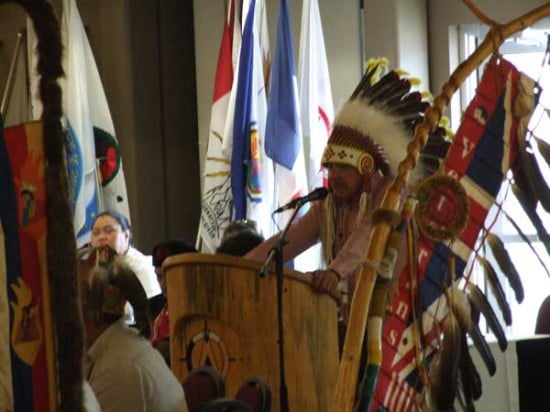 The regional meeting of the Ontario chiefs was hosted this year by the Whitefish River First Nation (WRFN), one of the partners in the new hotel, and members of the WRFN community could be seen working the registration tables, acting as security and catering the event, while dozens of vendors from First Nations across the Island and the North Shore set up booths outside the venue.

“We are very happy to welcome the chiefs to our territory,” said WRFN Chief Shining Turtle. He noted that the community had plenty of experience in supporting large scale events garnered through their work with the Little Native Hockey League. “Our young people are gaining a lot of first hand experience in how things work at the political level and making connections with people from many other communities across the region.”

Ontario Regional Chief Stan Beardy welcomed the delegates to the meeting, noting that it was fitting that the meeting was taking place on the world’s largest freshwater island and gave thanks to the surrounding waters of Lake Huron.

A group of water walkers who were travelling around the Great Lakes had hoped to arrive at the meeting prior to the end of proceedings but missed the morning ferry, delaying their arrival. During the meeting, the chiefs gave recognition of the important role played by water and the need to provide protection and good stewardship to a sacred source of all life on the planet.

The importance of moving the regional meeting around the province was also noted. “When I was given the privilege of serving as regional chief I knew that a key part of my job involves getting out to your communities and finding out more about your challenges and priorities,” said Chief Beardy in his opening address. The filling of local motels, hotels and bed and breakfast operations to capacity across Manitoulin certainly highlighted the economic impact of the conference.

Northeast Town Mayor Al MacNevin welcomed the assembled chiefs to his municipality and stuck around for much of the first day’s proceedings, a fact not lost on the First Nations leadership.

“The mayor came out and spent half the day with us,” said Ontario Regional Chief Beardy. “We appreciated that. It helps set the foundations of a meaningful relationship for both of our communities to prosper.”

The chiefs spent the bulk of the conference being updated on the ramifications of recent federal legislation and policy changes before settling into discussions on how to tackle challenges presented by First Nations poverty and its attendant issues.

Chief Beardy noted that partnerships will play a very important role in helping to tackle those issues going forward, even as the First Nations take back greater responsibility for their own destinies. Many of those partnerships are being found outside of the Canadian federal and provincial spheres as First Nations seek allies in the international community and the world of commerce.

At the same time, the need for real progress to be made in negotiations with the two Canadian political tiers has never been more important to maintaining civil calm.

“Our young people are experiencing tremendous frustration and that frustration with the slow pace of progress is growing,” said Regional Chief Beardy. “Our young people are very well educated, becoming more so with every passing school year, and they understand the gap that exists between our communities and those of the larger society that surrounds us.”

Regional Chief Beardy noted the current Third World conditions that exist on many rural and Northern reserves means that gap is large. Contrary to popular conceptions, “people in our communities lack the opportunities to go to higher education,” he said. Ensuring that those educational opportunities exist for everyone in the future is vital to building the solid economy that will benefit both houses and bringing a wider recognition of that important relationship between communities is an important consideration for the Chiefs of Ontario, he added. But unless there is real progress made soon, the spontaneous disruptions of the economy will grow.

“Our youth are the largest and fastest growing demographic of our population,” Regional Chief Beardy said in his opening address. “They are not willing to be treated as second class citizens in their own lands. Our youth are educated and motivated. They are not willing to be subjugated to anyone—they have grown up as the children and grandchildren of residential school survivors and they are ready to move forward. They will take whatever action is necessary to make the changes and build hope for the future, with or without the leadership.”

Although many of the remarks made in his opening address focussed on the Conservative government using their majority to force through legislation dealing with the First Nations without consultation, when it comes to partisan politics, Regional Chief Beardy settled a pox on all of their houses, pointing out that the previous Liberal governments have not acted all that much different in their approach and that dealings with provincial NDP governments left little hope in that direction either.

“We need to develop a strategy that involves more than making presentations to parliamentary committees,” he said. “This should only be one avenue that we pursue.” More important to the future of the First Nations are the building up of their own communities, reaching back to the past in culture and traditions for the bolstering of national-identity within the First Nations while building a sound foundation and grasp on the tools of modern prosperity.

Federal and provincial politicians were on hand for the opportunity to meet, greet and consult with so many chiefs conveniently gathered in one place and time.

Algoma-Manitoulin MPP Mike Mantha could be seen sitting in the elder’s lounge with M’Chigeeng Chief Joe Hare and longtime lands mover and shaker Louis Debassige and the federal Minister of Aboriginal Affairs Bernard Valcourt dropped in to visit, as did his Liberal critic Carolyn Bennett. Ms. Bennett found herself stopped in the hallways by many First Nations leaders as she moved about the conference centre.

“Since APTN (Aboriginal People’s Television) was started a lot of people have seen me on their televisions,” said Ms. Bennett. Being on the other side of the floor in the House of Commons has not hurt her popularity. “People see me fighting for their interests,” she said.

“We got along alright with the minister,” noted Anishnabek Nation Deputy Chief Glen Hare. “You have to be able to work with everybody, but you have to stand up for your rights with all of them too. It’s got to be give and take and so far all we have seen from anybody has been take, take, take. That has to change.”

Grand Council Chief Pat Madahbee took a less conciliatory stance with the Conservative government however, pointing out that Prime Minister Harper’s agenda has appeared to be counter to First Nations’ interests at every turn.

In closing his remarks, Chief Beardy said “we know what we have to do, we to have start using our treaty rights to create our wealth and reject ongoing government control over our lives. We have to re-build our nations and traditional governance systems—this means doing things differently, continue to assert our inherent authority within our territories and take a strategic approach in developing our economies.”