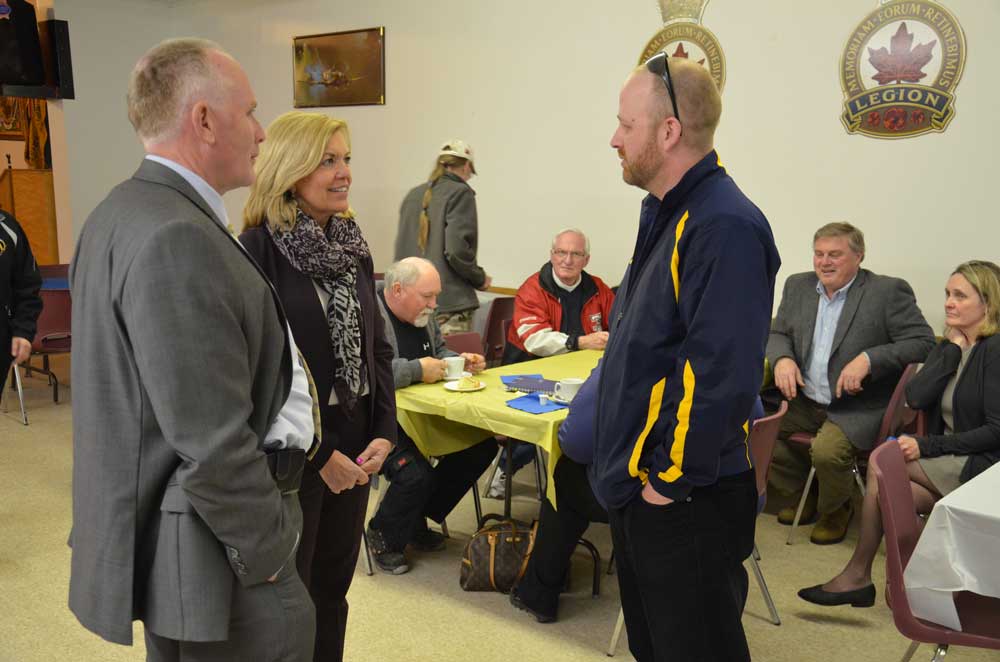 The Legion ladies laid on a fine spread of sandwiches, finger food, cakes, coffee and tea for the community members who came out to meet the MPP for Whitby-Oshawa. In addition to the local Tory faithful, familiar faces such as former Tory candidates Joyce Foster of Gore Bay and Joe Chapman and Jib Turner of Little Current, a good cross section of “non-partisan” community members from the health fields and First Nations were also on hand to meet and learn more about the woman who is seeking the Progressive Conservative leadership.

Ms. Elliott began her career as a lawyer, called to the bar in 1980, starting a law practice with her husband the late Canadian finance minister Jim Flaherty. Somehow managing to juggle the demands of a successful law career and that of an active politician, Ms. Elliott and her husband raised three sons.

She grew up in Whitby, where she said that she learned the value of hard work and public service at an early age. Her father was a teacher and her mother was a homemaker and community volunteer. Together, her parents instilled the “importance of responsibility, integrity and the knowledge that a strong resolve, hard work, education and family are the keys to success in life.” Her Tory roots are dyed in soul, as her schooling in politics began with passionate conversations around the dinner table and she “has been a Progressive Conservative ever since.”

Graduating from the University of Western Ontario, where she received her Bachelor of Arts degree and her Bachelor of Laws, her legal practice specialized in real estate, corporate and estate law.

Ms. Elliott leveraged her legal practice to not only assist businesses in Whitby, Ottawa and Toronto to open, expand and thrive, but also to pursue her commitment to public service. Her pro bono legal work for charitable organizations gained her the recognition as a Rotary International Paul Harris Fellow, the highest award with Rotary. She was also “a driving force in the development, construction, and operation of the world-class Whitby Abilities Centre, where people with special needs are given an opportunity to expand their personal horizons.” She is the past director of a number of organizations including Grandview Children’s Centre, Lakeridge Health Whitby Foundation, the Leukemia and Lymphoma Society, and Durham Mental Health Services.

Ms. Elliott was elected as the MPP for Whitby-Oshawa during a 2006 by-election and was reelected for subsequent terms in 2007, 2011 and 2014. She has served as the deputy leader of the Official Opposition and the critic for the Ministry of Health and Long-Term Care and Mental Health Reform. As an MPP, she was the author of private member resolutions that created the Select Committee on Mental Health and Addictions and the Select Committee on Developmental Services.

Ms. Elliott said that the message that she wants to bring to Manitoulin and the rest of Northern Ontario is that the region has a lot to offer the rest of Ontario. “I am really pleased and honoured to have Vic Fedeli’s support and great knowledge,” she said. “I recognize that the North has huge untapped potential and that it is a made up of many regions with different issues.”

Her commitment if elected leader is to create good public policy that will benefit the North. “Jobs and the economy are the most important issues,” she said of what she has learned is a common theme during a whirlwind tour that has seen her travelling from Thunder Bay that morning, onto Sudbury and then back to Sault Ste. Marie the following day.

Energy policy has also been a major issue she has run into across the province, but hearing about the issues is not quite the same as having a plan to deal with them, she agrees. While she said that she believes no one has a plan on tackling high energy rates yet, she does have a road map to a resolution.

“Listen to the experts,” she said. “I don’t think any one has a plan right now, but I will convene a panel of experts to come up with a comprehensive policy and, following the next election, I will implement that policy once we are elected.”

The Liberals, she asserts, are attempting to tackle issues like energy policy through ideology lenses rather than through sound economic considerations.

She also sees youth unemployment as a ticking economic time bomb that needs to be addressed. “We have a 20 percent youth unemployment rate in this province,” she said. “Yet we are trying to bring in skilled trades from around the world. I think we need to get young people into trades programs and we need to start right in high school.”

In addition to her career as a politician and a lawyer, and the volunteer work that she still pursues, Ms. Elliott “enjoys running, theatre, cooking, and music.”