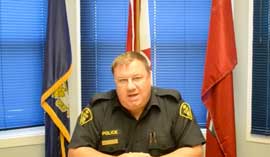 LITTLE CURRENT—Despite this upcoming Haweater Weekend being the busiest weekend of the year on Manitoulin, policing will not be lax in Little Current, Manitoulin or on the waterways, as the Manitoulin Ontario Provincial Police (OPP) will be executing its annual Haweater Weekend operational plan and enforcing a “zero tolerance” policy for all offences.

“As you can imagine, it is the busiest weekend for calls and response because of the number of people in this community (Little Current),” said Constable Boyd. “In previous years we have had upwards of 8,000 people in the downtown core alone during the fireworks Sunday night. Each year, one officer is placed in charge of developing an operational plan for the weekend. The plan is sent to the command regional office and is distributed to all the Manitoulin detachment officers, and officers who come in to help with the weekend. It not only includes a plan for Little Current, but all of Manitoulin, as we still need to ensure that all other areas of the Island are covered.”

Constable Boyd explained that the three main focus areas identified in this year’s plan are: having a zero tolerance approach to impaired driving, an increased focus and strict enforcement of Liquor Licence Act offences and zero tolerance for unsafe operation of water vessels and liquor violations on our waterways.

“There has been an attitude in the past by some individuals that it is okay to drink and drive or drink and walk around to the events with open liquor, but this is not the case,” Constable Boyd explained. “This will be strictly enforced and if the law is broken, people will be charged or arrested.”

“In terms of enforcing the Liquor Licence Act, we will be paying special attention to underage drinking,” continued the constable.

Constable Boyd said that three years ago the OPP was caught off guard when the busiest night switched from Saturday following the Hawfest dance to Sunday night following the fireworks.

“I guess the word got out on social media that Manitoulin was the place to party and that Sunday night was a street party and it didn’t matter if you were underage, that it is so busy you could underage drink or drink in public and get a way with it,” explained Constable Boyd. “We had masses of youth that came and quite a bit of damage was done. Since then we have been working with the Lions Club and now the street dance ends when the fireworks start. This has really helped reduce problems. We also do ride checks on Thursday and Friday, checking all the vehicles that come onto Manitoulin, paying close attention to vehicles full of youth.”

In addition to Manitoulin OPP, the SAVE (Snowmobile, ATV and Vessel Enforcement) Unit also assists with patrolling on Haweater Weekend.

“They both have officers on ATVs and on Sea-Doos helping patrol,” Constable Boyd said. “People don’t expect someone to come up to them on a Sea-Doo or on an ATV—they are able to come up on people unsuspectingly. Last year we actually had someone who was smoking an illegal substance pass it to the officer on the ATV who had pulled up next to a group without their knowledge.”

“The Drug Enforcement Unit (DEU) will also have officers present throughout the weekend,” continued Constable Boyd. “They will be both in uniform and plain clothes. Also, thanks to the Little Current Lions Club, we have a new bike that we will be putting into operation for the weekend.”

As part of the operational plan, all officers are given a list and map of all the events throughout the weekend, times and locations.

“It (the plan) includes a shift schedule with all the officers, their locations and their duties,” he added. “There will be upwards of 30-40 officers at any given time on duty in Little Current throughout the weekend from Thursday to Monday.”

“We have a very thorough plan in place and a great team of officers to keep both Little Current, and all of Manitoulin, safe,” said Constable Boyd. “There will also be an additional dispatcher assigned for only Little Current for Haweater Weekend. Individuals with non-emergency’s can call 1-888-310-1122 or *OPP (*677) on their mobile device. In case of emergency, call 911.”

“We hope that everyone has a safe and good Haweater Weekend,” concluded Constable Boyd, “but we will be prepared, present and operating with a zero tolerance policy.”