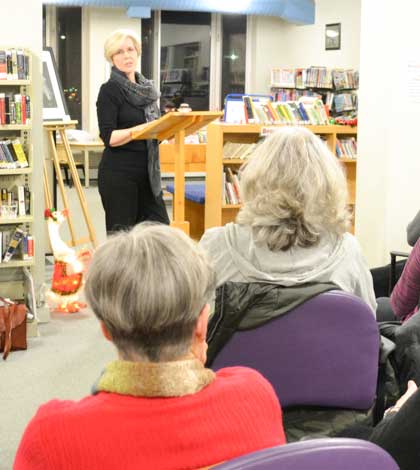 “I owe Manitoulin a real debt,” said Ms. Lawson, addressing the 30 plus individuals who had gathered at the library for the reading of her latest book ‘Road Ends,’ noting that she was not a Northerner and how her brother and sister-in-law helped with proofing and ensuring the Northern authenticity of the book. “I also need to thank Dr. Jack Bailey, who my brother introduced me to and provided me with so much information and details, and Chris Callaghan and Eddie Sagle, who helped me with one of my principal characters who drives a snowplow.”

“I am a slow writer,” revealed Ms. Lawson. “It has been seven years since my last book and this is my fourth book in 67 years, and one wasn’t even that good,” she quipped.

“I was in Norway on a book tour and during a trip to the art gallery I found myself in a room of Edvard Munch’s ‘The Scream’ paintings,” said Ms. Lawson. “As I stared at one of the paintings, I began to wonder about the individuals in the background and how they appeared to have no idea of their friend’s agony. That was the start of one of the characters for ‘Road Ends.’

After reading from each of the three main characters of the book, Ms. Lawson answered questions from the Island crowd and provided insight on her writing approach.

“The best, but hardest bit, is making up the characters,” she explained, adding that she steps inside of her characters and attempts to write through them, rather than looking at them from an outside perspective.

At the end of the reading, Ms. Lawson presented librarian Judy Kift with a donation from herself and her publisher Random House, a case of ‘Road Ends’ books, which were then sold, raising $300 for the library, in addition to two copies for the library’s collection.

“I planned Manitoulin to be the last stop on my tour,” Ms. Lawson told The Expositor. “It is my favourite spot and being here and the welcoming reception means so much to me.”

‘Road Ends’ is told through three characters: Tom, a man with a promising career who ends up back in his Northern hometown operating the town’s snowplow; Megan, who runs away to England to escape her small town and make a life of her own; and Edward, who struggles with the echo of his violent father.

It is the third book in a series of books that takes place in the fictional Northern town of Crow Lake (the title of the first book), however Ms. Lawson stressed at the Little Current reading that although some of the secondary characters are found throughout all three books, readers don’t need to read the books in order, as each are separate stories.

‘Crow Lake’ received both the Books in Canada First Novel Award and the McKitterick Prize and has been published in 22 countries, while her second book, ‘The Other Side of the Bridge,’ was a Canadian bestseller and long listed for The Booker Prize.

‘Road Ends’ is on sale at The Manitoulin Expositor in Little Current for $29.95 plus five percent GST, as is ‘Crow Lake.’

Kevin Closs digs into his spiritual roots on new CD

Manor gingerbread village was a labour of love