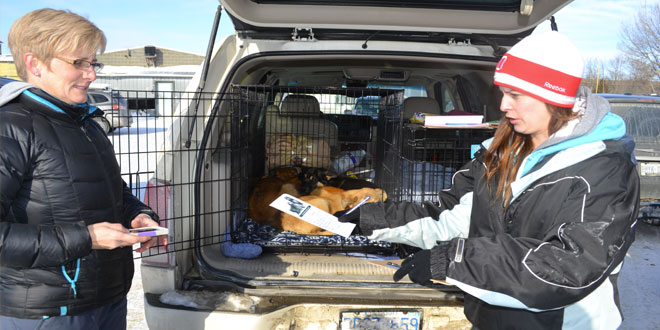 WIKWEMIKONG—PetSave, a Sudbury organization that takes in, fosters and finds homes for stray dogs and cats, did a second ‘sweep’ of the Wikwemikong Unceded Indian Reserve last Saturday, rescuing an additional 38 stray dogs to the 28 dogs the organization collected last month in the community.

“We collected 38 dogs during our sweep of Wikwemikong on Saturday with the help of 27 volunteers,” PetSave volunteer Heather Regimbal told The Expositor on Monday. “We had a lot of support once again from the community, letting us know where there were stray dogs or dogs in need of other support.”

With the help of Wikwemikong volunteers such as Allison Recollet, the PetSave team was able to round up 38 stray dogs, in addition to handing out collars, leashes, bowls and food to community dogs in need.

As the team collected stray dogs, each animal received flea and tick medication, which Ms. Regimbal said starts working within an hour. A vet record is also started for each animal that will stay with the dog as it moves from the community to the PetSave shelter, into foster care and eventually its adopted home.

“We were able to do a lot of community education during our sweep as well,” added Ms. Regimbal. “We went door to door talking with residents who had dogs on their property without collars and handed out collars, leashes, bowls and food to people who either needed it for their own pets or were caring for strays.”

Through a persuasive writing unit, each of the students in Tracy Manitowabi’s Grade 7 class wrote a letter to Wikwemikong chief and council asking for something to be done about the high population of stray dogs in Wikwemikong.

PetSave’s original visit in January saw 28 dogs collected and brought a great deal of media attention to the rescue and the community through CBC, CTV and The Expositor.

Wikwemikong Chief Duke Peltier and council are scheduled to meet with Ms. Manitowabi’s Grade 7 class this month to listen to their concerns and ask questions.

As for PetSave, they said they will be holding off on any additional sweeps until they have processed and found families for the 60-plus dogs they have rescued.