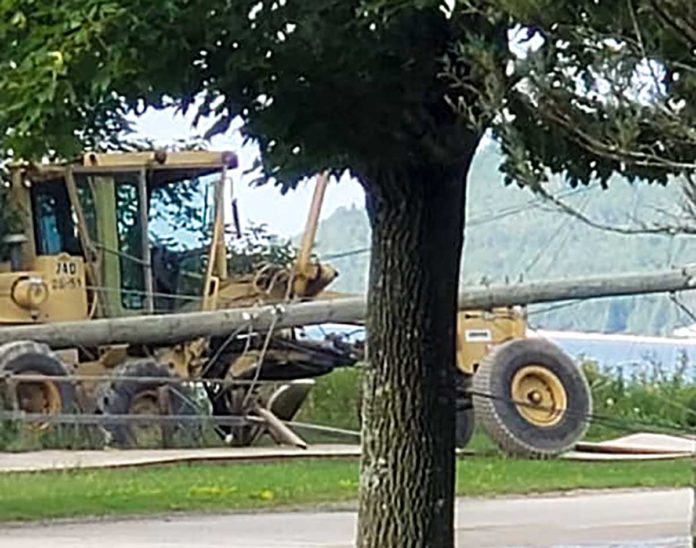 GORE BAY – Fortunately, the operator of a grader carrying out work in the Town of Gore Bay was not seriously injured in an accident that occurred last week involving a downed hydro pole.

“What happened is that the contractor (Beamish Construction) doing the road work up on East Street, on the hill near the former Gordon’s Lodge, was travelling up there in the grader when apparently the brakes didn’t work and the (grader) engine stalled,” said Gore Bay fire chief Mike Addison, explaining the accident that took place on August 10.

The grader ended up going back down the hill, going across the road and hitting a hydro pole (knocking it down) where the boardwalk ends, Mr. Addison explained.

Fortunately, “the operator of the grader was not seriously hurt,” said Mr. Addison. “It could have been much worse.”

Town public works manager Roger Chenard was called out by the company and requested assistance from the fire department. The Gore Bay volunteer fire department was called out to the scene at around 4 pm and firefighters assisted in blocking traffic so no one could get near the downed hydro power lines, said Mr. Addison. He added that Hydro One crews had to cut the power lines off of the grader.