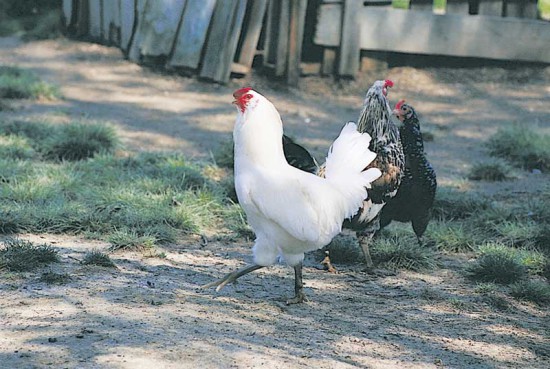 PROVIDENCE BAY—Small chicken farmers like Glenn Black want their voices heard by the government concerning the need for meat regulation changes, allowing farmers to grow, slaughter, and sell their self-inspected poultry at their farm gate, over and above 300 chickens.

“Premier (Kathleen) Wynne (Minister of Agriculture Food and Rural Affairs) has stated that the rural and farming communities need to be listened to, and that their voices count. We take her at her word,” stated Mr. Black. “Now is Premier Wynne’s opportunity to demonstrate her solidarity with that community, as well as all the consumers of poultry in Ontario. Now is the time to act.”

There are over 13,000 small flock chicken farmers in Ontario, Mr. Black pointed out. Under Ontario’s supply management system, farmers are only permitted to raise up to 300 meat birds per year. The farmers are asking that this limit be raised to 2,000 birds and they be given back the right to raise, slaughter, and sell their poultry from their farm gate. Farm gate meal sales were banned in 2005 unless those birds were slaughtered and inspected by a government-licenced abattoir. Many areas of Ontario have no government-licenced abattoirs that process poultry, thereby placing them in a catch 22, shutting down the farmer’s opportunity to raise a flock and earn a living, said Mr. Black.

On his own behalf, as well as on behalf of all small flock poultry farmers, Mr. Black has sent a letter to Premier Wynne detailing how farm-gate poultry sales can occur, while minimizing any food safety risks. This farmers’ group believes that farm gate poultry sales will offer chicken to Ontario citizens that is equal or better in qualify and food safety than what is currently available in grocery stores.

“It’s basically up to the Ontario public what they want. It can be through the Chicken Farmers Association of Ontario’s iron fist with 1,000 farmers supplying the product and getting the money from sales, with chicken prices being double in price next door. Or changes can be made that will make it better for all farmers and consumers,” Mr. Black told the Recorder.

“The Chicken Farmers Association of Ontario feel the current system process is fine, but I have a different opinion,” said Mr. Black. “They are protecting their interest, but farmers need the chance to make a reasonable living whether they are the big chicken farmers or a small operation like my own. In the meantime, the 13.7 million people in Ontario are being held hostage on the product they can purchase.”

Mr. Black said he can’t even become a member of the CFO under the current system. “I went on the CFO website to register as an attendee at their annual general meeting, and was contacted and asked what my poultry registration number is. It took a week to get the number out of them (CFO), because they didn’t know about Manitoulin Island or where we are. In the end I was told I am not allowed to be a member or attend the annual general meeting, or vote for representation or sit as a director on the CFO. It is basically a private club.”

Mr. Black has drafted a petition seeking support which will be forwarded to the provincial government. The petition states, “whereas Ontario has remote populations that are poorly served by the current food growing and distribution system, retail food prices are increasing faster than family incomes, 10 percent of Ontario families can’t afford the food they need, Food Banks are strained to meet the growing demand for affordable food, citizens need and want locally supplied and sustainable food production, government-created monopolies under the supply management system cause supply shortages and prices that are double those in neighbouring jurisdictions, and food deserts have occurred throughout Ontario, poultry is the least expensive meat in Ontario, and there are growing epidemics of diseases related to or caused by poor dietary nutrition. We the undersigned petition the Legislative Assembly as follows: amend the meat regulations so farmers are permitted to grow, slaughter, and sell their self-inspected poultry at their farm-gate for up to 300 birds per year, and other similar meats; provided the farmer meets reasonable science-based food safety standards, and gives full disclosure to each customer for the entire birth to meat process.”