“We’re in the process of completing consultations around the province for creating a complete mental health network to address the issues outlined in a report from 10 years ago,” said Associate Minister of Mental Health and Addictions Michael Tibollo following a visit to Aundeck Omni Kaning’s Gwekwaadziwin Miikan last Thursday.

The report in question refers to the work of the Select Committee on Mental Health and Addictions, a committee made up of members of the provincial Progressive Conservative, NDP and Liberal parties. Its final report released in 2010 called for the creation of Mental Health and Addictions Ontario, a sub-unit of the MOHLTC that will look after the province’s mental health and addictions services and ensure consistent offerings across Ontario. It also recommended merging all mental health and addictions services, including those for children and youth, into the umbrella of the MOHLTC.

Mr. Tibollo said 70 percent of kids suffer from some problems in their mental health. Of that group, he said 70 percent experiment with substances as a coping mechanism.

“If we can work with kids to provide coping skills, we can reduce that,” he said.

In its 2019 budget, the Ford government confirmed it would be matching the federal Liberals’ contribution of $1.9 billion for a total of $3.8 billion over 10 years toward mental health and addictions in Ontario. It created Mr. Tibollo’s new position in June of this year to focus specifically on this element within the health file.

Mr. Tibollo said he is no stranger to working with addictions and mental health. He ran the Toronto-based Caritas School of Life, a residential therapeutic community that hosts a two-year abstinence program. He is currently completing a doctorate in clinical psychology that focuses on the rates of people turning back to vices after finishing treatment. He said his passion for the topic is what pushed him to run for the first time in last year’s election.

“I consider myself an advocate more than a politician for people doing this kind of work. That’s why I shelved my law career and took a pay cut to become a politician and an advocate. I’m fortunate to be part of a government that recognizes the importance of mental health and addiction and created a ministry for it; it needed to be done,” he said.

Part of the province’s plan for mental health and addictions is to create an Ontario-wide structured psychotherapy program, based on the English model, which treats mental health clients using cognitive behaviour therapy (CBT).

“We’re trying to break the cycle of mental health and addictions using a holistic model of safe beds, encouraging community alternatives and different strategies for different groups of people. The net effect is saving many people, but not costing the system and improving the quality of life for the people of Ontario,” Mr. Tibollo said.

A robust mental health and addictions program that takes into account cultural teachings tied to the communities it serves will reduce hospital visits, reduce absenteeism and presenteeism (those who attend work but are ineffective due to their mental health) and should pay for itself in increased productivity over time, according to Mr. Tibollo. He added that the cost-neutral aspect was shown to be true in England and Australia.

According to 2010 and 2015 studies by the Mental Health Commission of Canada, Health Quality Ontario and the Centre for Addiction and Mental Health, mental illness costs Canada an estimated $51 billion per year. Substance use cost Canada $38.4 billion in 2014. Funding programs to help reduce these figures can cause a net gain to the economy if they manage to generate more benefits than their costs.

However, calculating this at the present time is a challenge, according to Mr. Tibollo.

“There’s no data that can tell us what we’re doing right or what we can improve in the system,” he said, adding that only time will indicate whether or not the proposed resources are successes.

“There’s no point providing services if it won’t improve a person’s life and we’re not getting the results we need. Harm reduction is especially important, providing opportunities for people to get their lives back.”

Part of his research for this phase includes travelling around the province to identify ‘centres of excellence,’ a description he said likely would apply to Manitoulin’s Gwekwaadziwin Miikan.

“We want to connect people to centres of excellence and want to aid these centres by providing the support they need so they can expand and grow,” he said.

Mr. Tibollo said using culturally sensitive programs is important and that the government can learn a great deal from studying their practices and effectiveness.

“If you can build those up well and offer good services, people will come. You have to make sure there’s connectivity too so if there’s a person in Toronto who could make use of a program like this, you can give them the option to come heal here and re-join the community to continue their journey,” he said.

The government will also be looking at youth education and affordable housing as vital parts of an addictions and mental health strategy. 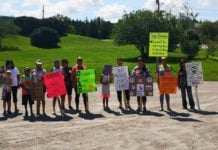